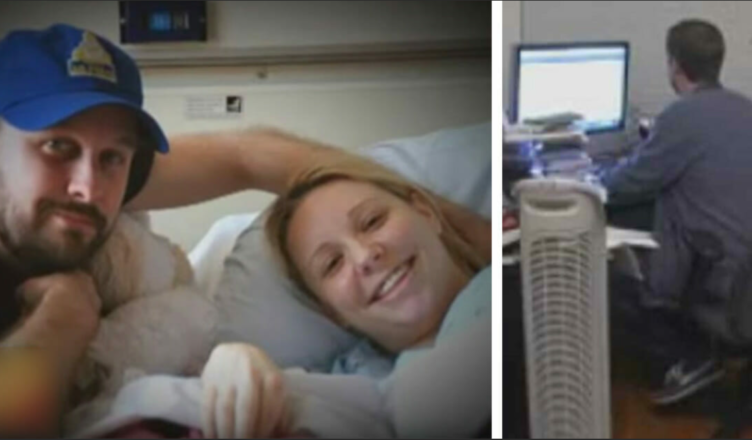 Life is such a fragile thing, and circumstances can change as fast as the wind.

This is something most of us never think about, but we will all always remember it. All it takes is one event that will change your life completely, happiness will become sadness, and light will become darkness.

It was in March 2008 that his life changed forever. He had just become a father and rode the waves of euphoria.

But then a nightmare ensued that no one could expect.

Just 27 hours later, his world turned 180 degrees upside down. Suddenly the future looked bleak, his plans shattered, and he was alone on a dark path. So he went to his computer, and things changed again..

Matt met his wife Liz in high school. Their relationship was full of love, passion, and exciting plans. They were together during high school, and one day, after graduating, they decided to get married. At this point they had been together for 8 years.

It was not long before Liz got pregnant! Look how happy she was.

Because their relatives were spread all over the country, Liz decided to set up a blog where she could update everyone on what was going on in her life. She wrote about her pregnancy, explaining in great detail her daily routine and the experiences she went through.

Her pregnancy was not easy. At one point, Liz was suffering from complications and had to go to the hospital — friends and family were updated through the blog, but were also very worried.

In March 2008 she was ready to give birth. Seven weeks before the estimated date, little Madeline entered the world air by caesarean section.

The happiness that Matt and Liz felt knew no bounds. Their dream came true — they finally became parents! A new chapter in their lives began. Look how proud Matt looks..

Unfortunately, the beginning of the exciting journey very quickly turned into a nightmare. Liz did not have much time to see and feel Madeline, as she needed a lot of rest after the birth. But the next morning, it was time for Mom to meet her little angel.

But things did not go as planned. Liz got out of bed and started walking, but suddenly collapsed to the floor.

27 hours after giving birth, Liz died as a result of a massive pulmonary embolism.

The pain Matt felt was indescribable.

A few hours after the big moment in his life, everything he knew and was used to suddenly collapsed and shattered. The pain and sorrow he felt were unbearable.

The single father needed a place to deal with his feelings. So he came up with an idea — to sit down at Liz’s computer.

He opened the computer, found Liz’s blog, and began writing for himself.

He wrote, and kept writing, then wrote more.

In the same blog where his beloved Liz wrote and revealed her pregnancy journey, Matt poured out his heart and thoughts as a widower, a single father and a heartbroken man.

In the blog he wrote everything he felt and the process he went through after Liz’s death.

It was honest. It was authentic. It was open. He exposed his vulnerability.

Very quickly the rumor about the blog spread on the net, Matt kept updating, and he became popular among his friends.

Within a few months, an average of 40,000 readers entered the blog every day. And it kept growing and growing..

The readers, whom Matt had never met before, became part of his family. They started sharing tips and advice for Matt on how he can deal with the grief and pain.

«I never dreamed people would give me advice, or help me during this process», Matt said.

The tips were on a wide range of topics, including how to prepare for a flight with the baby.

«It helps me, it helps me every day. I mean, it’s about the things Madeline will have to deal with in the future, and I want her to think in 20 years, ‘Wow, how did you do all this stuff?'», Matt said.

«I want Madeleine to have the life Liz wanted her to have. Because she’s my whole world. She’s my world, she’s the only thing right now in the whole world that I care about. She’s number one.. and she’s going to be number one all my life».

Matt’s interview on Rachel Ray’s show was extremely moving. You can watch it in the video below:

A story so tragic, but we’re glad to know Madeline is in good hands and has a wonderful father like Matt.