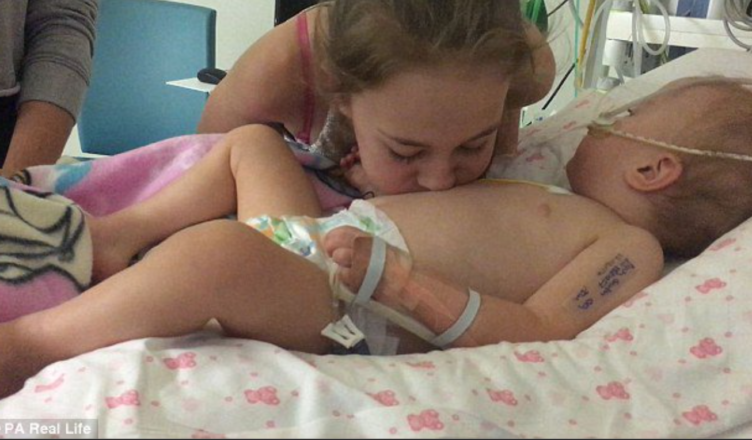 There is nothing worse than small sick children.

When Poppy, Amy and Stephen Smith’s daughter was born, they immediately realized that there was a problem with her. Their daughter was born prematurely and the doctors diagnosed her with Mobius syndrome, a rare disease that paralyzes facial muscles and makes it difficult to speak and eat.

Little Poppy spent her first days in the intensive care unit and slowly her condition improved. Her parents hoped that despite the illness, Poppy would grow to become a healthy little girl.

And when she was 15 months old she started walking, and her parents were very happy. But she still had trouble making sounds, and she could not laugh or smile because of the illness.

It all went for a while, but when she celebrated two years, something tragic happened. Poppy became very ill.

Her mother found her unconscious in bed and immediately took her to intensive care.

The doctors discovered that the girl’s lungs were full of fluid and oxygen did not reach her brain, and as a result she suffered brain damage. Her condition deteriorated and the doctors were afraid she would not survive.

The family celebrated Christmas at the hospital, fearing it would be the last Christmas with their daughter. The sisters Elisha, 14 years old, Macy, 12 years old and the brother Alphie, 11 years old, stood beside their little sister.

It was the moment that Macy, trying to cheer Poppy up, blew air into her belly (as parents love to do to make their little kids laugh).

And that was the moment that something happened that no one could explain.

Poppy laughed — for the first time in her life.

«Macy blew air into her belly button and suddenly Poppy started to laugh, we did not believe what we were seeing», father Stephen said to the Mirror.

Shortly after, Poppy’s condition began to improve. A few weeks later she managed to crawl, and spoke much more than before the brain damage.

It was nothing less than a miracle.

«Now we believe that Poppy will talk again, and from the moment she was born she never stopped fighting».

What an amazing story! Poppy is a little warrior. And we hope she will grow up to be a healthy and strong girl. With such a loving family at her side, we believe it is absolutely possible!

What an amazing story! Poppy is a little warrior. And we hope she will grow up to be a healthy and strong girl. With such a loving family at her side, we believe it is absolutely possible!