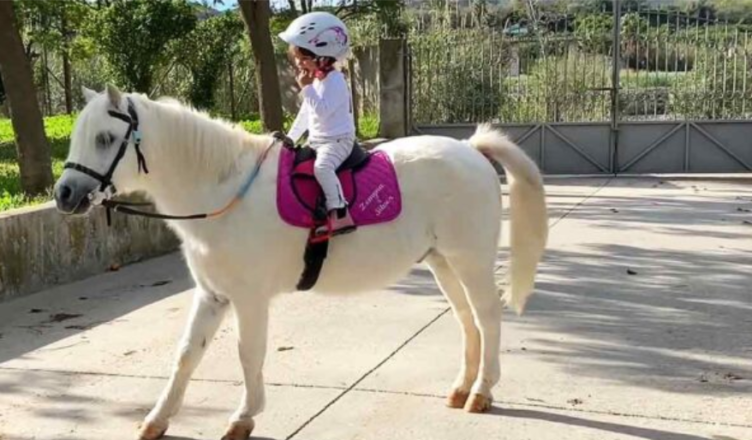 Growing up in a household where your dad and mom adore animals certainly has its perks. Where some kids must beg their parents to get a pet, a few parents have already created a zoo at home for their little ones.

Zemyna was a lucky toddler raised on a farm full of horses. Her parents had recently got her a beautiful white pony, Silver (19-year-old), to accompany her. So the little girl was very responsible.

Zemyna, a 17-month-old little girl, had been tasked by her parents to take care of Silver. Every morning she helped her pony get out of the enclosure. She would open the door and then prepare to groom Silver.

Zemyna ensured Silver was well groomed. Then, she would brush the whole body of the pony with her tiny little hands. This was one of the most tedious jobs for a toddler. However, this helped to form a bond with the pet.

This would help the horse and the little girl learn to trust each other and build chemistry between them. Zemyna would later walk up the makeshift stairs to climb the pony and get the saddle on Silver. The duo would then set out on a ride.

After a long ride, the duo relaxed for a while. Zemyna and Silver then had some snacks after the long journey. The little girl could be found eating oranges while Silver was grazing on the green plants next to the road.

After eating, the duo set out again for a ride. First, the smiling little girl enjoyed her amazing pony ride. Later, she was found hugging her pony and smiling brightly at her parents.