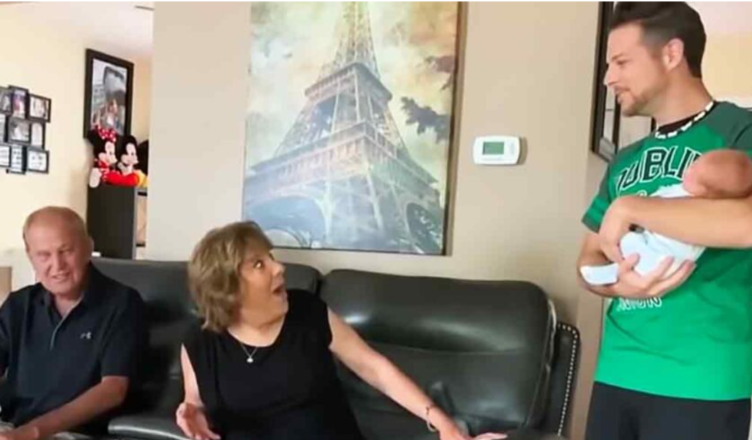 “These grandparents are getting the shock of their lives.” The video begins showing father Tom, who’s carrying his son, Ace. He walks into the living room where Grandma and Grandpa sit on the couch, with their granddaughter Brinkley relaxing in the bassinet.

Tom’s wife Briane films the scene as the grandparents see their second grandchild for the first time. “That’s a real baby,” Grandma exclaims. Her reaction—a mixture of shock, disbelief, and happiness—is understandable.

After all, she’s only known about one grandchild up to this point. Grandpa seems to be taking the news in stride, seemingly amused and pleased with this sudden turn of events.

The news reporter narrating the video explains how the couple has kept this child a secret. Since Brinkley and Ace were born during COVID restrictions, the grandparents couldn’t be there for the birth.

Tom and Briane had told the new grandparents about Brinkley but decided to keep Ace a surprise. Tom had always wanted to keep a child as a surprise if he had twins, which gave him the perfect opportunity.

After telling his mother that he “didn’t have time” to wrap her birthday gift, he used the opportunity to surprise her with baby Ace. Of course, he simply had to catch the big reveal on tape.

The video ends with a quick bit from Grandma, who explains that she thought her son was pranking her initially using a doll. No worries, Grandma: this one’s real! As expected, the grandmother was overjoyed to discover that she had not only one grandchild but two.