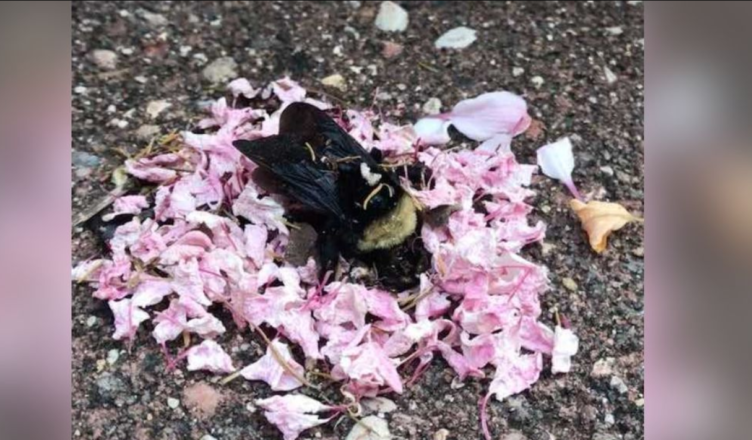 Oh my gosh, this is so cool.

When we find it hard to get along with others, we should look to the Animal Kingdom for inspiration.

Particularly an unexplained act of kindness by a group of ants.
The ants seem to be throwing what looks like a funeral for a bumblebee.

The video shows a bumble bee sitting on some gravel and surrounded by pinkish-purple flower petals.

Then you see some petals inching toward the bee.
That’s when you realize there are ants carrying the flower petals to the deceased bee.

“This video was taken outside of my work by the garden. There was a dead bumblebee and the ants were bringing flower petals to lay around him. It looked like some sort of bee funeral,” Nicole Webinger wrote on Facebook.

Webinger, who works in Stillwater, Minnesota, was shocked by the display.

So, was the rest of the internet.
Her video ended up going viral.

Apparently, it’s not the first time some ants have thrown a bee a funeral.

“I have put Twitter back on my phone specifically to show you these circular arrangements of petals i found around multiple dead bees. If you are a scientist who knows what the hell is going on here, please tell me!” she wrote in her post.

“It figures, then, that they’d be sensitive to the chemical signaling of other animals.”
“In the case of these dead bees, it’s not known why they died – but their corpses are likely sending the ants some kind of message, and so it’s possible their floristry is a response to this.”

The ants might also see the bees as their next meal.

Putting the flower petals over the bees might be an attempt to cover their meal, so other scavengers don’t get it.
“The arrangement would therefore be less of a funerary practice and more like hiding takeout leftovers as a UFO (unidentified foiled object) in your dorm fridge to stop prying roommates from eating them.”

Another theory is that the bees emitted a signal that the ants should tidy up.
Ants love to clean and practice necrophoresis to keep their colony areas tidy.

“As an adaptation that lessens the spread of pathogens, necrophoresis sees the ants gather their smelly dead and carry them away to a dedicated tomb. Some colonies even have specialized undertaker ants for the job.”

The ants could be performing the same task but with bees – covering up the corpse would prevent it from attracting attention.

We still think it’s an ant funeral though.
Check out the ant funeral below.
Please SHARE this with your friends and family.