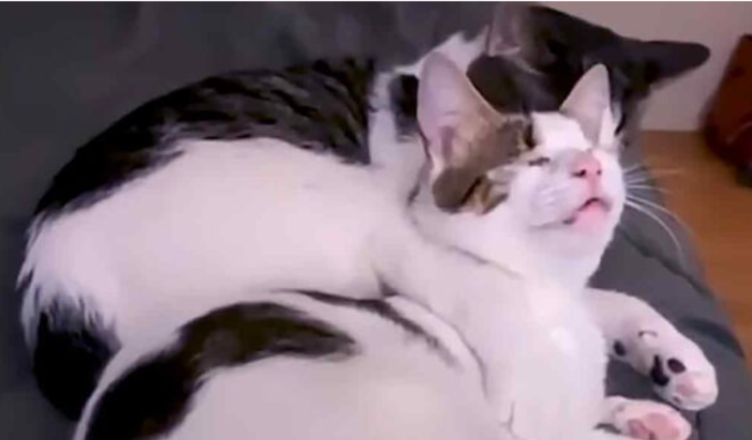 Jackie and Ellison had a cat, Melvin. The cuddly blind kitty always wanted to be close to his human parents. But, since he could not see, he had to get close to his owners to recognize them.

That was his way of bonding with his owners. Melvin was an only child for two years before Scout came into the family. Then, Melvin’s former foster mom messaged Jackie about a cat that looked a lot like Melvin.

She asked Jackie if she could foster the poor kitty, Scout. Ellison thought that she was like Melvin’s long-lost sister. So, the parents brought the tiny kitten home only under the pretense of fostering her.

They wanted to check if Melvin and Scout would get along. But unfortunately, Melvin was not pleased about it. He made all sorts of crazy sounds, proving that he was filled with rage. He thought that Scout had come to mess around with his happy life.

Scout got the attention and love that was meant for him. She was like a little sister wanting to play with the brother, but the brother did not understand her and did his own things. On top of that, they were both blind.

Scout even tried submitting to Melvin, but the kitty did not understand. However, the sister did not stop her advances and kept trying to impress her brother. The parents were concerned as they did not get along for months.

4 months after the couple brought her home, Scout and Melvin started warming up. This was a relief for the parents, who wanted to adopt the other cat. The two of them loved each other.