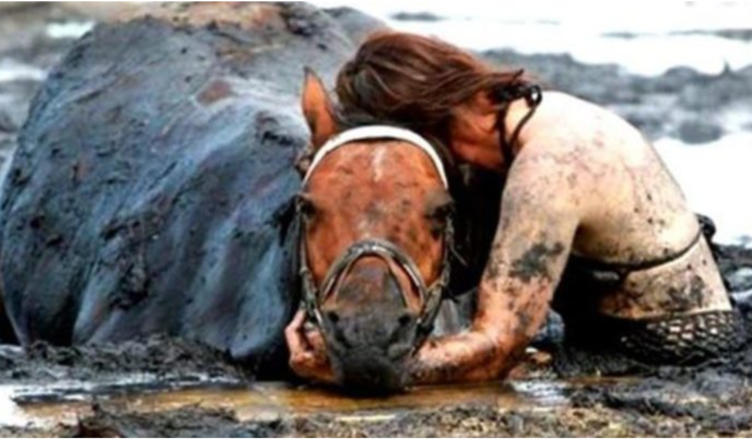 As usual, on Sunday evenings, Nicole Graham was riding her horse on a country road. It started well, with the sun warming and the wind blowing, and there was not a soul around.

But suddenly, the horse accidentally stumbled and fell into a precarious swamp. Nicole got off her horse and tried to help him, but unfortunately, it was unsuccessful.

Astro could not stand himself or with the help of his owner because he weighed about 500 kg.

He was terrified, and he was pushing so hard to get out. But fear in this situation only damaged the drowning animal, so the horse sucked deeper and deeper into the quagmire.

The woman did everything she could to help her beloved pet, but neither lifting nor pulling out him did not work.

All she could do was keep the horse’s face from drowning in mud. So Nicole kept him from certain death.

For three hours, the horse and its owner fought the threat of drowning unaided. But finally, they saw the local resident. Naturally, he rushed to their aid and called the rescue first.

Finally, rescuers arrived and quickly pulled out the horse, with the help of several dozen people and a tractor.

Miss Graham, like her Astro, has been under a lot of stress, and both are very tired. The woman couldn’t calm down for a long time – it even went to a soothing injection.

But after a rest, already at home, Nicole washed and cleaned her favorite pet of the swamp mud, and she was able to clean herself up.

It was only thanks to a strong horse owner that Astro survived.