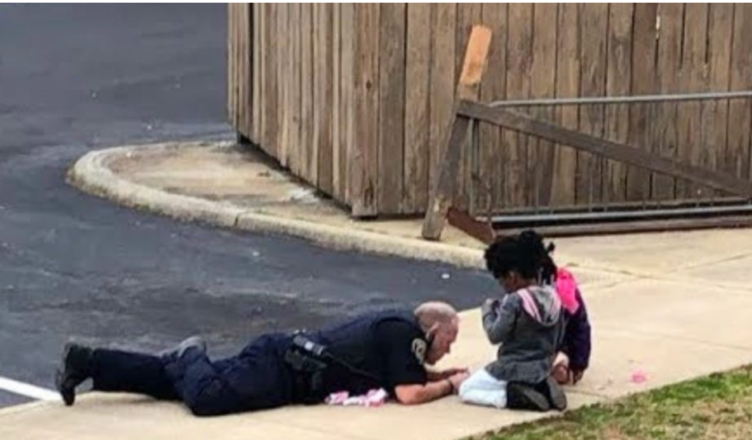 When mom saw the officer she quickly reached for her phone.

Corporal C.B. Fleming does not run around the city wearing a black cape and mask, nor does he need a utility belt with cool gadgets to get attention, but the neighborhood kids still call him Batman.

An incredible man
The 42-year-old Fleming is famous, especially with the kids, in South Hill, Virginia.

A gas leak is what led to this officer’s name going viral. He spent the afternoon making sure the children were safe. And that’s when they gave him the affectionate nickname.

Finding out a disturbing reality
Fleming arrived at Iesha Roper-Boswell’s home together with a few emergency responders thanks to a dispatch call last week. They made sure the house was safe first then he started chatting with Roper-Boswell.

The 28-year-old mother soon opened up to Fleming, telling him that her daughter, niece, and the other kids in the neighborhood were afraid of cops.

Making it right
After that conversation, Fleming got down on the sidewalk so he could play with the children. The kids were obviously surprised and happy to have a new playmate. One in uniform!

Making headlines
Roper-Boswell captured a quick video using her phone, making sure she recorded the heartwarming moment. It’s a video that’s been viewed countless times on both Facebook and YouTube.

Dad of four
Fleming is a father to four biological children and two adopted kids. He has been working at the South Hill Police Department in Virginia for the last 15 years, and he’s always made it a personal goal to be a positive part of his community.

“It’s something I’ve always tried to do,” Fleming told WTVR. “When I got into this job, I knew there was something different, other than just writing tickets and being the bad person all the time. I figured if I could be that bright spot in someone’s day then that’s all that mattered.”

One of the good guys
He is the positive part of the community.

“He’s awesome. That’s the only word you can really use to describe C.B.,” Roper-Boswell says. “It’s just amazing, the bond he has with the children. “For him to make my child feel like she’s safe, she doesn’t even have to call 911, she just has to call C.B. if she’s in trouble. I’m glad he made this part of his job. He’s changed my daughter and niece’s lives.”

Now this is real public service.

Stays humble
Fleming doesn’t need a fancy sign or an attention-grabbing suit. In fact, he wears the same uniform as his colleagues but it is his attitude towards his job and others that makes all the difference.

He deserves all the attention.

And he actually does enjoy interacting with the kids. It’s not an act or a front but a genuine affection he has for the neighborhood kids. The children love him for his efforts.

This is how you make a difference in the community.

Watch officer Fleming with the kids in the video below. He really is a hero.