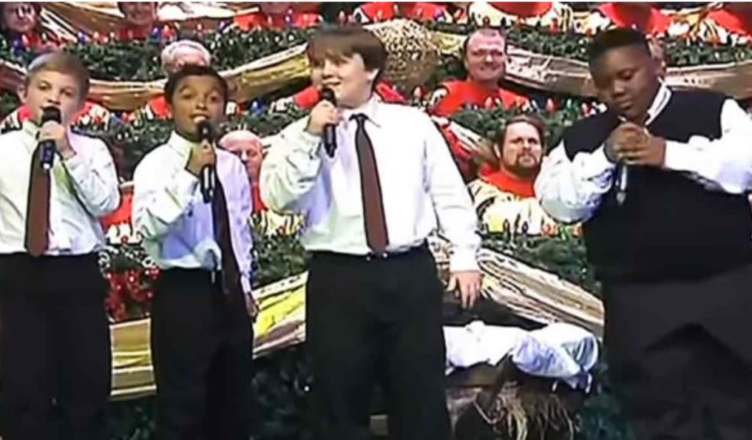 Everyone loves a good Christmas concert, and this particular show had a big surprise. The conductor grabs the microphone and says, “There was a quartet bus right out on Herbie street. Right out here. And the quartets here, they want to sing. Do we want them to sing?” The crowd laughs and says yes.

The stage has green and blue lighted snowflakes hanging from the top and a giant Christmas tree in the middle, with adult choir members actually sitting on every deck of the tree.

The quartet appears, and they are four young boys, roughly age 10. The young performers come out in white button-up shirts and dark red ties. The music starts, and the boys open their mouths in unison, but they all have grown men’s voices. The crowd laughs because they all know it is lip synced to pre-recorded men singing.

The boys put on a show, and the crowd is intrigued. The soloist of each verse is the bass singer, who stands alone, and the other three boys stand together and sing backup parts for him. He is singing some booming low notes.

Each soloist got into their part, raising their hands, pointing to the sky, snapping their fingers, and even bopping around a bit to make the performance even more hilarious to the crowd. They would also lean into each other on the tight harmony parts like a barbershop quartet.

In the middle of the song, the lyrics are about Christmas bells, and the boys sing “Ding-a-ling” and motion as if they are ringing a bell. Their big smiles and fantastic physical comedy have the audience laughing the whole time.

At the song’s end, the boy who performs the bass voice sings his last word very low, acting as if he passed out, falling to the stage floor. The others sing “Ding-a-ling” one more time with the bell motion, and the audience gives them thunderous applause.