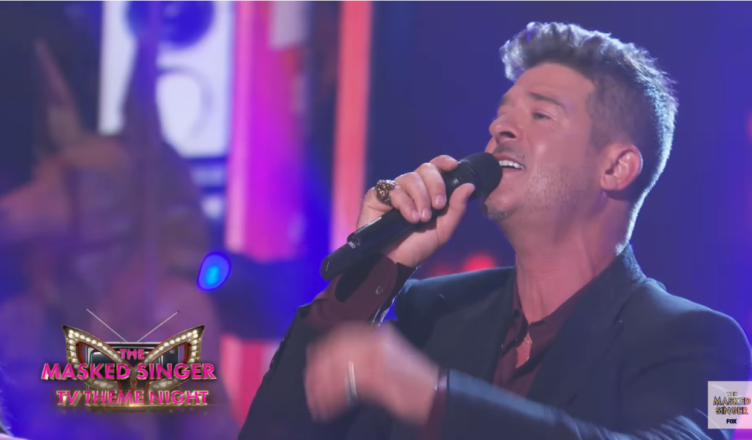 The talented singer and judge of “The Masked Singer,” Robin Thicke, recently paid tribute to his late dad, the legendary Alan Thicke. It was an extraordinary moment for him and Alan’s fans while his son performed the theme song from the sitcom, “Growing Pains.”

Alan starred in the sitcom from 1985 to 1992. The talented singer sang the song “As Long As We Got Each Other” for The Masked Singer’s “TV Theme Night.” Robin appeared to be sitting backstage as he began to sing the song. However, soon he joined his co-stars onstage.

After the fantastic song performance, all the celebrities stood together on the stage. At the same time, a massive image of the young Robin with his legendary father, Alan Thicke, appeared on the enormous screen behind them.

Robin’s co-star, McCarthy, hugged the singer and stated, “Robin, that was so good.” Cannon added, “Give it up for my man, Robin Thicke, one more time. With an amazing tribute to America’s dad and Robin’s dad, the unforgettable Alan Thicke.”

The legendary actor Alan Thicke played the role of Seaver, the family head on the sitcom “Growing Pains,” which made him an iconic figure in Hollywood. Robin had always honored his father on essential days and loved to talk about him.

“The Blurred Lines” singer had written an emotional note on social media a few years back as he remembered his dad. It said, “Happy Father’s Day! Miss you, Pops. Wish you could carry me home tonight.”