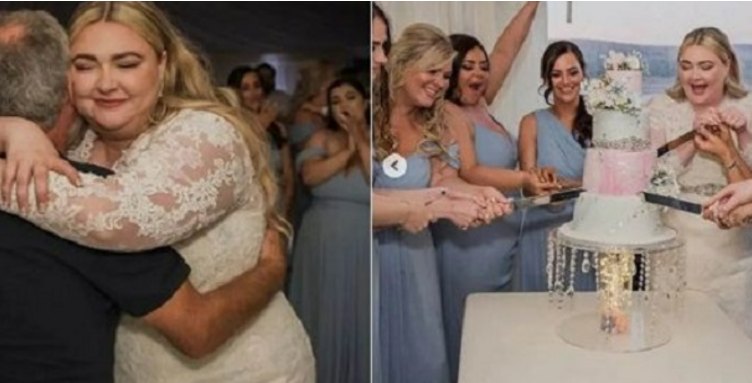 She celebrated in style despite the fact that her boyfriend left her the same day without giving an explanation. For many human beings, one of life’s great dreams is to walk down the aisle with the person they love. And when that moment arrives, they couldn’t be more excited.

However, not everyone feels immense joy when they are about to get married. Some people decide not to get married on the same day as the wedding and leave the event or simply never show up, leaving their partner with a broken heart and thousands of questions. This is exactly what happened to a girl who yearned to marry her boyfriend; however, it never happened. Kayley Stead, a 27-year-old woman from the UK, woke up one day full of illusions because she was getting married. And that same day, her boyfriend decided she wasn’t going to get married; but without letting him know, he just disappeared.

Kayley didn’t want this day to remain marked all her life as a negative memory. Maybe there was no groom, but she cut the wedding cake and had her first dance. Her relatives, friends and the rest of the guests supported her at all times and made the celebration unforgettable for the girl. Kayley wanted to celebrate and have an amazing time, as planned.

According to the young woman, it was the best decision she could have made since the party really benefited from it. We know that planning a wedding is done several months in advance and a lot of money is spent; so Kayley didn’t want all of her dream wedding work to go down the drain. When she told her friends about her decision, of course, they were quite surprised but weren’t shy about supporting her. During her celebration, they accompanied her and created an atmosphere of true joy.

They even went a step further when the girls launched a campaign to raise money through the GoFundMe page so Kayley could pay for everything that was spent at the party. The young woman made the grand entrance with the song “Good as Hell” by Lizzo accompanied by the groomsmen and their bridesmaids. Although the usual wedding events did not take place in the traditional way, they did.

Kayley danced with her father at the famous “first dance”; She then danced with her brothers and even the ex-boyfriend’s godparents. She also cut the cake and she and her guests had a great time. Everyone wanted to see her happy. After that day, no one heard from the man. Many of his relatives tried to talk to him but without success; it seems to have disappeared from the face of the Earth.

Her boyfriend’s father spoke to her to confirm that he would not be present and would never return. The groom’s family also did not want to explain themselves and, like the young man, they were conspicuous by their absence. “We tried to contact him, but there was no response from him, there is no reason. I haven’t had an explanation, not that I want one, because it’s been a long time,” Kayley said.