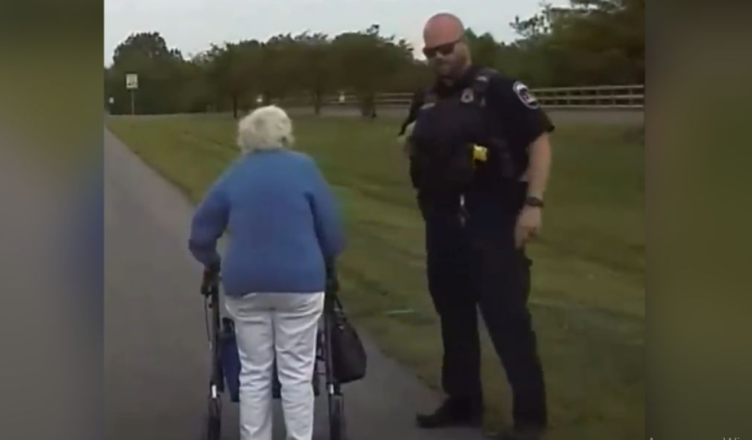 He felt something was not right.

Good deeds do come a long way, literally and figuratively.
Whenever we mention “doing good”, we often romanticize doing community outreach or volunteer work. These are good and well-intentioned but it also makes smaller and impactful acts of kindness go almost unnoticed.

These are everyday acts that all of us can participate like carrying things for someone who’s having a hard time, leaving an outside light open in a particularly dark street, or helping an old person get to wherever they need – across the street or to their appointment.

Officer Lance Hoffmeister was on his routine patrol when he came across an old lady.
It wouldn’t have been a heartbreaking sight if he saw her comfortably sitting on a porch or lounging in the park.

No, Officer Hoffmeister saw the old lady walking along a busy highway and under the sun. To make matters worse, the old lady was trudging using a walker.

Officer Hoffmeister then stopped right behind the old lady so he could talk to her.
“I didn’t know if she wandered away or if she was lost that is why I wanted to check on her,” he said to Inside Edition.

The 84-year-old woman, Elizabeth Good, was apparently on her way to an appointment for a perm. She was walking to the Paul Mitchell studio.

When asked how she ended up on the side of the highway, she explained that the bus she took could only get her so far. The bus stop is about a mile away from where she needs to be.

Officer Hoffmeister then insisted he drive her the rest of the way using the police car.
In a video feed from the cruiser, they could be heard joking around with Officer Hoffmeister. The policeman could only offer the backseat where suspects are usually seated.

He said that he was not going to handcuff Good but the old lady, still spunky, said that there’s a first time for everything.

The rest of the drive, recorded via the police car’s dashboard camera, showed the length of road that Good had to walk with a stretcher.

Officer Hoffmeister admitted that he has a soft spot for elderly women.
He said that Good reminded him of her grandmother who passed away just a few years ago. And for most of us, seeing other old people struggle makes us think if people are going to help our grandparents when they need it the most.

“Obviously it is a good feeling. I have a special place in my heart for my seniors and it just made me feel good,” he said to Inside Edition. “I think that’s what the job is all about.”

After dropping her off, it was the only time they introduced themselves.
But this won’t be the last time that the two will see each other. He also drove back to the salon after her makeover so he could drive her home.

Now knowing that Good has regular appointments for her hair, Officer Hoffmeister also offered to drive her to her appointments so she wouldn’t have to take the bus.

How’s that for serving the community?

Watch how this officer acted when she saw an old lady trudging on the side of a highway.