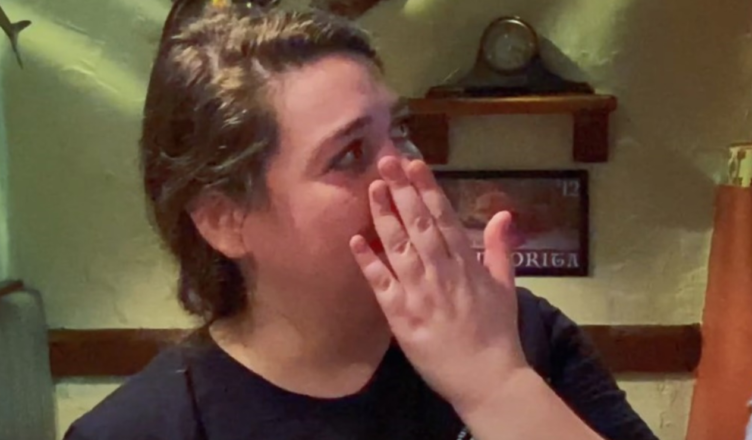 The struggling waitress had no clue that her customers were actually a group of «angels» in disguise.

Working as a server in the food industry is not easy. Long hours on your feet meeting the demands of customers is very tiring. And the pay really isn’t anything to talk about.

So tips go a long way for these hardworking men and women who bring our food and drinks. And do smile at them, please.

This story is special.
A Michigan waitress was recently given a huge tip and her reaction was so good, we can only thank the people recording that they captured her on video.

Chauncey Pearce is the waitress here and she works at the Beltline Bar in Grand Rapids.

She received her huge tip from Generosity Lunch.

What is Generosity Lunch?
The group was created by Jonathan Mast. The lunch program is designed to surprise a waiter or waitress with a nice tip.

At the scheduled lunch, every person in attendance brings at least $100. The money is all collected before lunch starts. and once everyone is happy and full, the bill is delivered to the table and the food is paid for out of all the money collected earlier.

What remains of the money is left as the tip for the server. It’s a very nice way of showing appreciation for the hardworking servers.

This group has many former waiters and waitresses wishing they were still around!

So what happened was, 14 West Michigan locals had their lunch at the historic Beltline Bar in Grand Rapids, Michigan and it was Chauncey who waited on them.

They each brought $100 to the table and when it came time to pay for lunch, there was a huge amount left as see in the video where they counted the bills for the food.

Then there were leftover bills.
Additional anonymous donations sent the collection to $1,700. After paying for lunch, a tip of $1,451 and change was left for Chauncey.

She was so shocked she couldn’t believe it.

Chauncey went on to share about her problems with rent but thanks to these guys, she’s holding her solution!

“For those that can afford to do this, they should. This is a wonderful idea, and even just one, two or three people could really make someone’s day. Good job group!”

Now do the math because whichever way you look at it, that’s a huge amount for a tip!

Whatever else Chauncey was worrying about just didn’t seem to matter anymore. See, servers like her will smile at the smallest tip so to be handed such a big amount?

You get the idea, especially if you’ve worked in a restaurant.

Another viewer who seems to be Chauncey’s friend commented,

“Girl you deserve it! I told you everything will be ok, your always supported and to have faith. I’m so happy for you girl!!!!! And bless these people who are so kind to have blessed my friend this way! You guys are literally angels.”

And she is so right. This group of angels deserve so much recognition for their kindness and generosity.