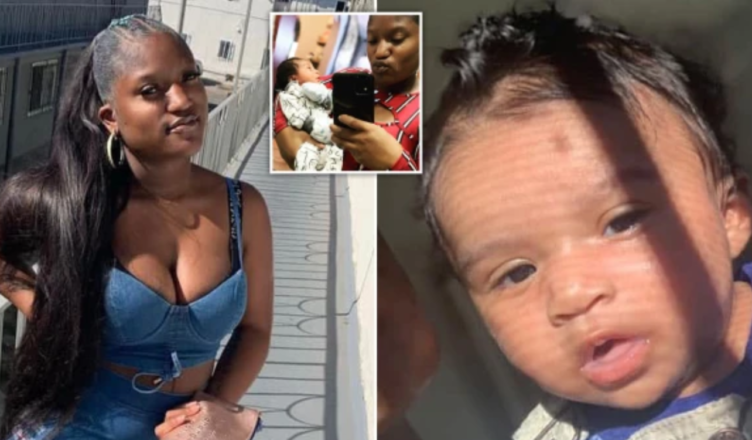 The high-speed crash occurred around 2pm on Thursday at the intersection of La Brea and Slauson avenues in Los Angeles. Surveillance footage showed the vehicles in flames near a gas station.

Asherey Ryan, 23, her one-year-old child Alonzo Luchiano, her unborn baby, and its father Renald were pronounced dead at the scene. They were heading to a doctor’s appointment for a checkup on her pregnancy when a Mercedes Benz rammed into them.

Nicole Linton, 37, a Texas nurse working in California, was arrested and taken to a hospital, where she is cooperating with investigators, law enforcement sources told the Los Angeles Times on Friday.

‘I already cried. I cried. I didnt sleep one bit. I’m all cried out,’ Ryan’s sister Sha’seana Kerr said on Instagram. ‘We have to bury four people.’

Kerr said she immediately felt something was wrong when she saw footage of the fiery crash.

‘As soon as I see that video, it hit home, it hit different. I felt connected,’ Kerr wrote. ‘Her taking my sister my nephews my brother in law. She took my son’s only cousin. We are so deeply hurt.’

California Highway Patrol spokesman Franco Pepi said three adults, a pregnant woman and an infant were killed, meaning one more adult died who has not been identified.

Eight other people were hurt in the crash.

A GoFundMe page created on Friday afternoon states that ‘the worst thing occurred’ on Thursday.

‘We need help with funeral expenses because they did not have insurance so any donations help,’ it states. ‘Please let the family mourn in peace.’

Linton is set to be charged on Monday by the Los Angeles County district attorney. Her charges may include killing an unborn child and six other people.