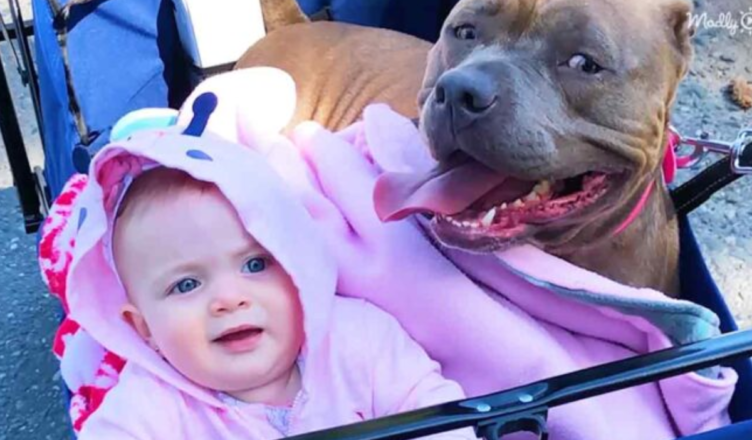 Brittney & Ricardo lived with their kids, Ricardo Jr & Natalia. The latter was born after Layla was adopted. Layla, the puppy, looked like a seal. The little one was specially-abled but fierce.

Layla had ribs that basically were square. Since Layla’s body was flat, it seemed like they were holding a book. This was when Ricardo brought a Pitbull puppy home. After getting her home, they found out that she had Swimmer’s Syndrome.

The family did not know about Swimmer’s Syndrome and tried to help the pup as much as possible. However, the family found it weird that her arms were almost straight out whenever the puppy slept on her back.

So Brittney used her headbands and hair ties to tie her feet together. The Pitbull puppy was a fighter from the very beginning. Soon she mastered walking and became a very spunky dog.
This trick helped the family to take Layla everywhere. They would take her to the beach and go trekking with her. She loved car rides too. Before Natalia was born, Layla always lay on her mom’s belly.

It was as if the Pitbull was hugging the baby. When Natalia was born, Layla ensured she was always beside her baby sister. The little pup became the elder protective sister.

The puppy went on wagon rides around the neighborhood with her baby sister. The two of them basically grew up together and were like best friends. The little toddler and the adorable Pitbull were inseparable like two peas in a pod.