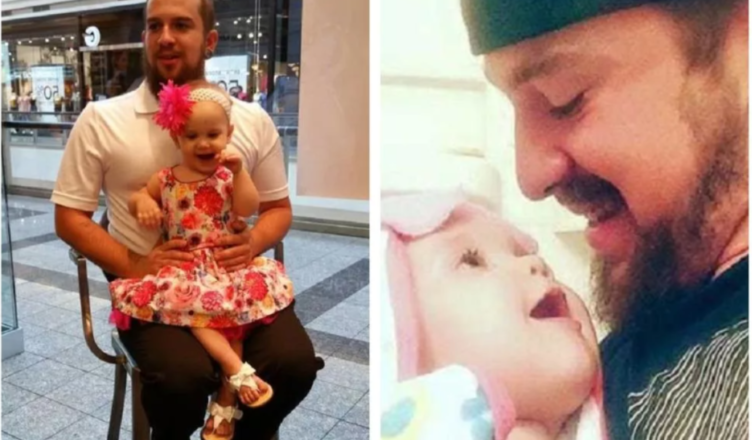 We have all heard stories of fathers who abandoned their children and women and are not in contact with them at all. But it’s not common to hear about mothers that abandon their family.

In January, Richard’s life changed radically. He became Father for the first time. But Richard’s luck ran out and his life turned upside down.

When Richard’s daughter, Persephone, was only a month old, his wife took her away and moved to California.

She must have suffered from postpartum depression, and in the middle of her crisis, she threatened to put the daughter into adoption unless Richard came to take her now.

Richard did not want to lose his daughter and immediately drove to California to take her with him.

He would be happy to reunite with his daughter, but their future was not clear. He never treated a child alone.

In times of distress, Richard turned for help from an unexpected source, a Facebook page called Life of Dad. The group of single fathers gave Richard the support he needed and helped him a lot.

He wrote an open letter to the group, and the letter immediately became viral and spread across the internet like wildfire.

«My name is Richard Johnson, I’m a single parent of a pretty girl named Persephone, her mother left us about a month after she was born, we still don’t know why, but we suspect postpartum depression played a major role.

In the first few weeks that we were just me and my daughter, I happened to bump into your group. I was so nervous and scared to be a father, but now that I was a single parent, I had two roles to fill. And I was not sure how to do it.»

«I read every ‘New parent’ book I could find and I watched more than 1000 hours of parent training videos — from hair braids to nail painting to theories about coping with common problems, and then I started to follow your group and saw that there were other fathers with similar problems. The group gave me confidence and helped me through this.

I’m always waiting to see the pictures and read the stories of the great fathers who are in your community. You have been very helpful to my daughter and me in very difficult times.

We are both happy now and continue to grow together every day. She is 10 months old now, and my friends are asking me for parenting tips as a favor now. We have come a long way, my daughter and I, and we certainly owe a large part of it to the group and the people in it. So from both of us, thank you very much.

It’s not easy to be a single parent, no matter whether it’s a mother or father. And anyone who does it deserves all the respect in the world!