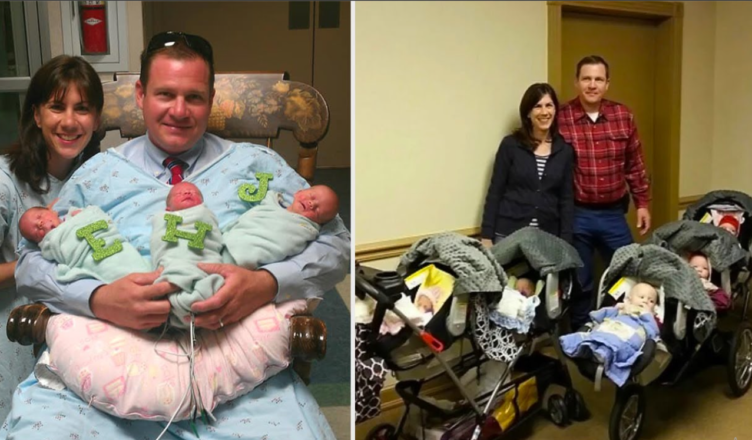 For years, Andy and Sarah Justice tried to become parents. Unfortunately, they reached a point where they felt their efforts would bear no fruits, and they would never have children of their own.

At that point they decided to contact an adoption agency. They teamed up with a pregnant woman and the plan was for them to adopt her child as soon as it was born. But the woman had a surprise for the young couple — or should we say ‘surprises’.

The woman whose child they were to adopt was not pregnant with just one child, not even two, but three! The trio were on their way and Andy and Sarah received the news with great happiness, adjusting their expectations. A short time after, the trio emerged into the world — Joel, Hannah and Elizabeth.

But this amazing story did not end there. Only a week later, Sarah started to feel something different and made an appointment with the doctor. The unbelievable came true…Sarah was pregnant. With twins! At this point we already thought that the story was not true, but these are the facts.

«We were very lucky. Were we a little surprised? Of course. But we are happy. We felt that it was something from heaven, that God had a plan for us. And sometimes when you do good things, you get them back, one after the other», Sarah said.

In just a few weeks the family grew from two to seven, with five babies under the age of one, with twins Abigail and Andrew joining the big family. According to the parents, they need 84 bottles and 300 diapers a week to take care of the little ones.

Watch the video about Andrew and Sarah’s amazing journey: