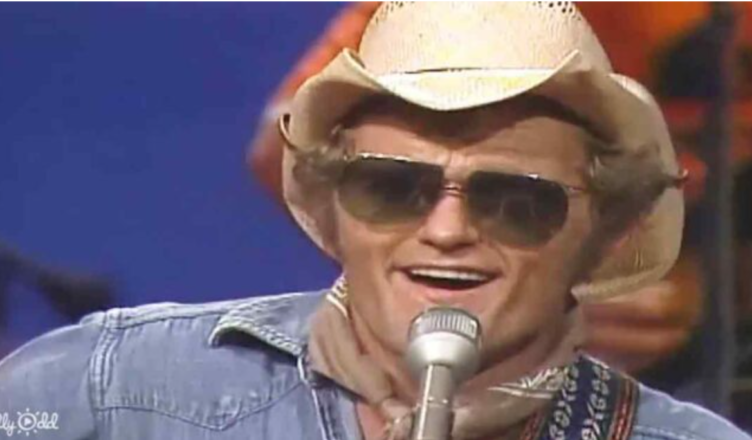 Country legend Jerry Reed performed his hit song ‘East Bound and Down’ live on ‘Pop Goes The Country’ in 1978. Jerry sits on a stool in the middle of the stage with a full band behind him as they rock this country classic.

The orange platform stage is lit with a blue background and hexagons making it look like a TV game show set. Jerry is wearing an old blue denim shirt and jeans with blue socks and no shoes.

He has a bent tan cowboy hat on with sunglasses and a guitar in his lap. The introduction of the song rips in with a fast banjo solo. The fingerpicking from the banjo and guitar in this song is second-to-none.

Jerry taps both his sock-covered feet wildly throughout the performance.
He drums with his hands on his legs during one of the verses. He ends by singing a long note, and a lightning-fast guitar riff closes the tune. The crowd claps as Jerry looks back at the band and smiles.

Jerry Reed wasn’t simply a singer. He appeared in more than a dozen films. His signature songs were ‘Guitar Man,’ ‘U.S. Male,’ ‘When You’re Hot, You’re Hot,’ and ‘East Bound and Down.’

Jerry was inducted into the Country Music Hall of Fame in 2017. His song ‘East Bound and Down’ was featured on the soundtrack to the 1977 film ‘Smokey and the Bandit,’ starring Burt Reynolds.

The iconic trucker song spent 16 weeks on the U.S. Country Music Charts and peaked at number 2. Jerry Reed’s unique style and incredible talent were a hit with country audiences for decades.