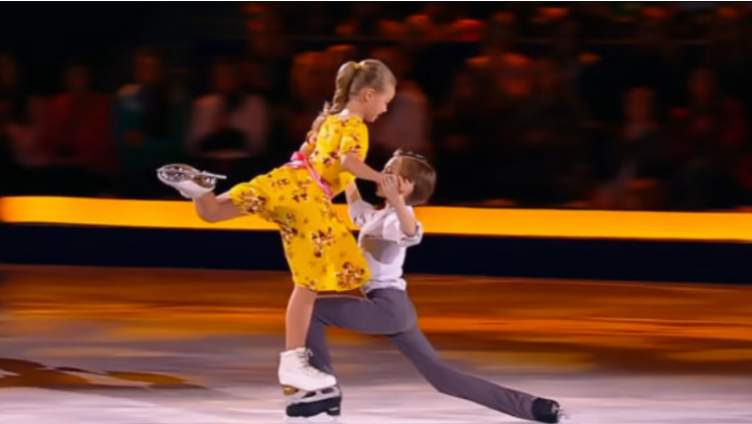 The duo of nine-year-old Evelina Pokrasnetyeva and twelve-year-old Ilya Makarov gave a stunning ice skating performance. They were helped by their famous coach Ilya Izaslavovich Averbukh.

For the competition, the theme was movie music, and they skated to ‘City Of Stars,’ from the film ‘La La Land.’ The pair of young skaters have an undeniable bond and extraordinary friendship.

Their coach was supportive of them during the entire journey. He was there with them on the ice as they practiced, and he was there watching from the side during the performance.

Evelina wore a pretty yellow dress covered with flowers, and Ilya wore slacks and a grey shirt. They went on the ice and took their positions. Ilya started the routine with Evelina waiting for her queue to enter.

It was a mesmerizing sequence as Evelina entered with a smile on her face. The crowd cheered for them, and the duo converged on the ice and began skating together.

Their routine was more than just a dance. It told a story. There was a bench on the ice, and Ilya helped carry Evelina onto it, and she danced across it while he supported her.

Evelina and Ilya glided across the ice as if they were flying. Their maneuvers were perfectly executed, and they trusted each other completely. After their performance, they received a bouquet of flowers, and their coach hugged them.