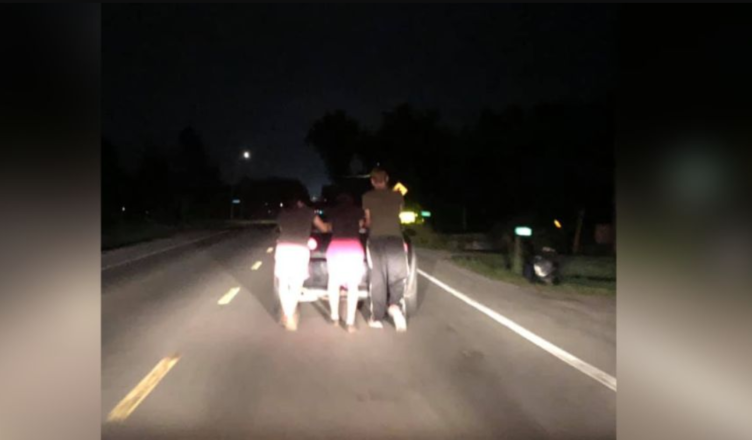 These boys are being raised right. ❤️

She had purchased the car just six weeks earlier. But here she was broken down on the side of the road.

The Candian woman’s car had to be towed.
There was just one problem. She couldn’t afford to call a tow truck and her home was more than five miles away.

Thankfully three teens had no problem stepping up to help. Aeron McQuillin, 18, Bailey Campbell, 17, and Billy Tarbett, 15, went for a drive down Highway 20 to grab some drinks at Tim Horton’s in Ontario when they saw the woman and her smoking car at the intersection.

The woman would have called her roomate but she had to work at 5 a.m. and didn’t want to disturb her.

But the young men were more than ready to help.
The teens took a look at the car and realized there was no way they were going to get it to run.

“We decided to get the car out of the road because it’s not really the best place to have a broken down car,” McQuillin told Inside Edition.

So, they pushed the car into a nearby parking lot and formed a plan about what to do next.

They realized that the only course of action was to push the car all the way back to the woman’s house, even though it was 5 miles away.
They were ready to do this but realized they had to drive their own car to the woman’s house first, then get a ride back. Bystandard Dan Morrison was driving home from work when he saw the smoking car and decided to help

“I drove my car to the destination. Almost 10 kilometres away. We got a ride back with Dan Morrison, where we got some waters, grabbed our speaker and began pushing the Chevy Cobalt down Merrittville Highway, with Dan behind us in his Ford Escape, with the 4-ways on,” McQuilin said in a Facebook post.

After an hour and a half of pushing, the young men finally pushed the woman’s car all the way to her house.
“About 20-30 minutes in, our calves hurt and we were like, ‘This is getting really tiring’ but we just kept going. We pushed through the pain,” Morrison wrote on Facebook.

McQuillin said their phones were “blowing up” with messages and Facebook notifications from complete strangers offering their appreciation and gratitude for this random act of kindness.

“On behalf of Bailey, Billy, and myself – thank you so much to everyone for the kind words and offers of gifts. We hope more people can learn from this situation and not be afraid to lend a helping hand to those in need,” McQuillin said.

The teens’ story ended up going viral and was shared with several news outlets.
“In a world full of crap that we wake up-to everyday, it’s heartening to know that people like you kids exist. I am double your age but humbled by your generosity, kindness and maturity. This world needs more people like you guys. Wish this world could learn something from you guys,” wrote one of the many people who commented on McQuillin’s Facebook post.