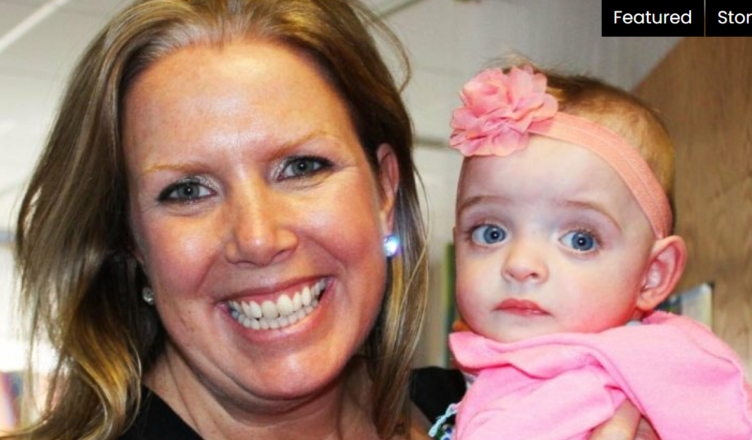 Thank you Liz for being such a compassionate person, you are an angel. God Bless you and your daughter ❤️

That life is unpredictable and full of surprises isn’t something we aren’t fully aware of. Many times, most of us have plans for the future, but things don’t always turn out as expected, and we find ourselves in situations we never imagined we could experience.
Liz Smith, director of nursing at Franciscan Children’s hospital in Brighton, Mass. has seen her siblings and friends getting married and having children, and that’s exactly what this 45-year-old woman wished herself. She knew deep down she would be a great mother one day, hopefully as loving and as dedicated as her late mother. Smith’s parents got divorced when she was 19, and she recalls how her mother would always make sure their home was filled with joy and laughter.

“My mom was a pediatric nurse who always put others first,” said Smith. “So I grew up wanting to be a nurse, too.”

Smith is the best aunt in the world for her 13 nieces and nephews and everyone agrees how this lady is the most caring person they’ve ever met. Smith’s sister, Elly Smith, says how her sister is a nurturer by nature and if given the chance to become a mother, she’d play that role just perfectly.

Smith believed that in vitro fertilization could help her conceive, but her health insurance wouldn’t cover the expensive treatment, and she couldn’t afford it either. Although she wanted children badly, she never considered fostering or adopting, until that serendipitous encounter with the 8-month-old Gisele, the girl with bright blue eyes and an angelic face.

Smith first saw the sweet little baby while one of the nurses at work was wheeling her down the hall. Smith remembers asking, “Who’s this beautiful angel?” The answer she got, “Her name is Gisele” wouldn’t stop ringing in her head. She wouldn’t forget Gisele’s single soft brown curl either.

It appeared Gisele was transferred at the hospital where Smith worked when she was only 3 months old . She was born prematurely back in July 2016, and only weighted 2 pounds at birth. She experienced breathing problems as a result of her mother’s drug abuse during pregnancy. The poor baby had a feeding tube and not a single visitor during those long five months she spent at the hospital.

It was then that Smith learned how the state of Massachusetts and the social services were in search of a foster home for Gisele. And this woman who’s biggest wish was to be a mother knew that was it. She told herself, “I’m going to foster this baby. I’m going to be her mother.”

“I never imagined becoming a mom would be a challenge,” Smith said. “It’s a desire you can try to push away and fill with other distractions, but it never goes away.”

“Since the moment I met her, there was something behind her striking blue eyes capturing my attention,” she said. “I felt that I needed to love this child and keep her safe.”

“She was behind developmentally, and I wanted to get her out of the hospital and get her thriving,” Smith recalled.

In April 2017, Smith was given permission to take Gisele home. However, she was told how the state would do anything in their power to reunite the baby with her biological parents.

“Leaving the parking lot of the hospital with Gisele and a car full of baby stuff, I was in shock that it was happening,” said Smith.

She took some time off in order to take care of her new baby. Her friends and family were all very supportive of Smith’s decision to foster the infant, and they even organized a baby shower and bought her a bunch of baby stuff.

“I was excited but nervous, realizing that I was committing everything I had to this child who might not be in my life forever,” she said.

The baby’s parents were granted weekly supervision visits, but the state determined they weren’t capable of taking further care of their biological daughter so their parental rights were terminated, which meant Smith could apply to become Gisele’s mother legally.

“The day I got the call that their parental rights were terminated was very sad,” she said. “My gain was another’s loss. It’s a feeling difficult to describe when you are experiencing this life-changing moment that someone else is as well, in the opposite way. The bottom line is: It’s devastating for another family.”

Thanks to all the love Smith and her brother Phil showered little Gisele with, she showed amazing progress and by the time she turned 15 months, she could walk and even say a few words. Smith recalls how her daughter’s first word was ‘badoon’ for a balloon.

October 18, 2017 was the day when these two loving ladies officially became a mother and a daughter and it was the best day of their life.

“This is the mother-daughter relationship my sister has waited a long time for,” said Phil Smith, 44. “It’s plain to see that they have brought a completeness to each other.”

Even though Gisele is still using a suplemental feeding tube at the age of 2, her days are filled with lots of laughter. She enjoys eating cheese and pizza and is the sweetest little lady.

“Her new favorite song is ‘You Are My Sunshine,’ ” said Smith. “And every time she sings it, I think to myself, ‘You have no idea.’ ”