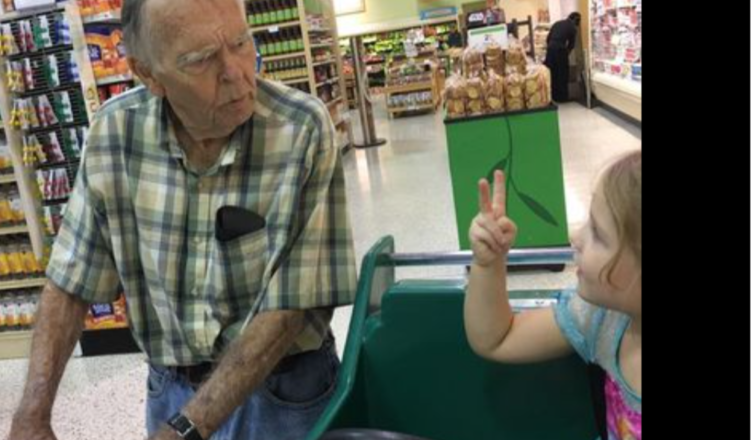 “The man was elderly, stone-faced, and furrow-browed. However, before I could ‘Shush’ her for calling him an ‘old person’ or ask the Earth to swallow me whole, he stopped and turned to her.”

We know birthdays are those special days of our life that we want to spend with those we love the most. However, sometimes, our birthday can be someone else’s best day, as in the story about the older man who was greeted by the most adorable young girl on the day of her birthday. That is when Mr. Dan’s lonely life changed for the better, because now, he got to hang out with his new tiny friend. The way these two companions met is a heartwarming story shared on Facebook which touched lots of people.

The 4-year-old Norah was at the store with her mother, and the two were eager to buy all the stuff for the girl’s birthday party. While sitting in one of the carts, ‘driving’ along the store’s shelves, Norah spotted an elderly man.

Even though a couple of other elderly people passed by the mother and the daughter, it seemed like Nora got fond of this particular gentleman the moment she saw him.

She was more than happy to get closer to him and share the fact it was her birthday that day. She did it all happy and excited. At first the man had sort of grumpy expression on his face, but once he realized the young lady was talking to him, he started smiling and said “Well hello little lady! And how old are you today?” and then they chatted a bit before they waved goodbye.

But the young lady wanted to take a picture with the man, and since it was her birthday, her mother said yes and hurried to catch the man and ask whether she could take a picture of him and her daughter.

When they spotted him once again, Tara, the mother said “Excuse me, sir? She’d like to know if you’d take a photo with her for her birthday?”. He looked confused at first but he was more than happy to pose with the girl, and so “they posed together and then they hugged each other like they were long lost friends.”

After they thanked Mr. Dan for the photo and his time, he assured them that he was the one who should say thank you because it was obvious he felt really happy to interact with the birthday girl. He said that day was one of the best days he had in a very long time.

Tara was also deeply touched by his words, and she was glad her daughter made this man’s day so she felt like she should share the encounter with her Facebook friends, but little did she know that it would reach many more people among which one Mr. Dan’s friend who let her know that Mr. Dan had recently lost his wife and that she hadn’t seen him look this happy during those past years of his life.

Learning about the loss he suffered, Tara though it would be nice if she and her daughter reach their new friend again and spend some time together. Mr. Dan couldn’t hide his excitement of having Norah as a guest at his house.

Tara then added to her Facebook post by saying that the sweet elderly man will be part of their family, whether he likes it or not, but you may be guessing that not only he likes it, but that is something that completely turned his dull life upside down, for the best.

On the first visit “Norah brought him a framed picture of the two of them in the grocery store, pictures she colored (he put them on his fridge!), and a bag full of pastries and Butterfingers…if he doesn’t already have diabetes, he’s about to,”

Mr. Dan Peterson says little Norah hugged him firmly like there was no tomorrow, and he didn’t mind it.

Mr. Dan is now happy to welcome Norah any time she likes to spend some time with him. He is forever grateful to this special young lady who brightens his days.

Tara reveals that “he said that he hadn’t had an uninterrupted night of sleep for the past several months. Sadness and anxiety had made his mind wander at night, but since meeting Norah, he has slept soundly every single night. He said she healed him.”

Tara is happy to raise a child who knows how to treat elderly with respect, and she strongly believes that every parent out there should teach their children that those people are important part of our community and we have to do all in our power to make their days enjoyable.