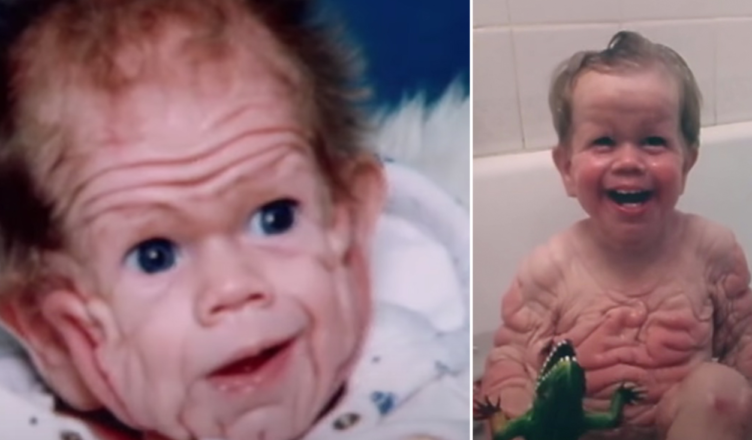 “When he came out I was quite shocked (…) I didn’t think a human, or a little baby, could ever look like that.”

Back in 1993, the birth of a baby boy named Tomm Tennent from South East Australia stunned not only his parents and doctors, but pretty much the entire world. The story of his mysterious condition which left him with enough skin to cover the body of a 5-year-old made everyone wonder what life would bring for this boy.

Tomm’s parents were aware their bundle of joy would be different, but no ultrasound could prepare them for the severity of the condition. When they were told something was wrong with their baby, they even considered terminating the pregnancy, but luckily, that didn’t happen.

Speaking to 60 Minutes Australia, Tomm’s dad, Geoff Tennent, said back in 2003, “When he came out I was quite shocked (…) I didn’t think a human, or a little baby, could ever look like that.”

His mom also spoke of the moment she first saw her baby boy. “My heart came up to my throat, but at the same time it was lovely to pick him up and cuddle him,” she said.

Over the years, Tomm spend a lot of time at hospital, not because he was sick, but because doctors wanted to examine his condition and learn how to help him. Since the literature never documented a case like his before, they had a hard time learning what caused him to have so much excess skin.

Upon further research, they were finally able to give Tomm and his parents some answers.

Namely, experts saw similarities between the way Tomm looked and the Chinese dog breed Shar Pei. They discovered that Tomm’s level of Hyaluronic acid, found in skin, was 100 times higher than normal, which is the case with Shar Pei puppies.

Knowing that those levels drop as puppies grow older, doctors hoped the same would eventually happen to Tomm. And they were right.

However, until reaching that point in life, Tomm experienced certain difficulties. Besides that, he has always been a lovable boy who loved the way he looked.

Since 2003, when Tomm and his parents gave the interview to 60 Minutes, 28 have passed. Today, Tomm looks completely normal, no excess skin at all.

Although his story didn’t receive much media attention while he was growing up, except for, of course, when he was born, many people wondered how Tomm looks like nowadays.

Well, according to his Facebook, he’s happily married to wife Hannah.

“Life’s simple. You make choices, and you don’t look back,” Tomm posted on his Facebook profile, and we assume this quote sums up his mindset and whole life.