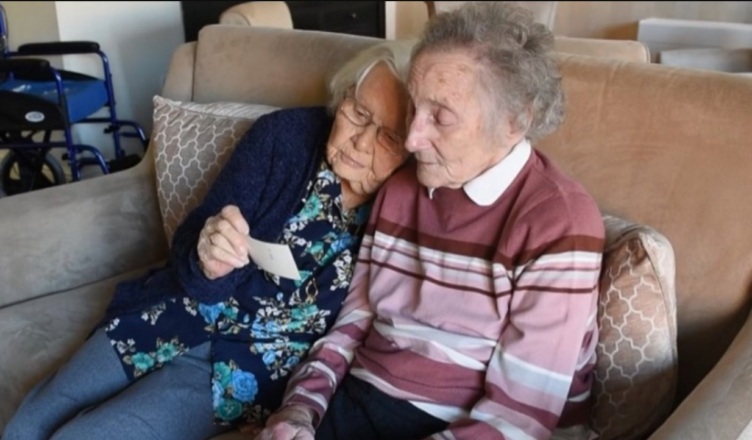 Nora and Eileen thought they’d never see each other again. But instead, they ended up coincidentally at the same nursing home and were able to rekindle their beautiful friendship.

Many besties hope that they’ll get to spend their senior years together.

But for Nora Boardman and Eileen Gill, it actually happened.
Even after they spent 70 years apart. And it was a total surprise to both of them.

Boardman and Gill were childhood best friends and hadn’t seen each other in decades until they wound up at the same nursing home together.

When Gill moved to Crispin Court Care Home in Stafford, West Midlands she was totally shocked to see a familiar face.
It was her old school pal Boardman. The women were overjoyed to see one another when they confirmed each other’s identities.

“And she says are you Nora Keelan?” Boardman recalls.

The women said they were truly glad to be together again and felt like they never skipped a beat.“I never thought I’d see Eileen again after we went our separate ways as children – so it was so nice to see her. I couldn’t believe she was now going to be living in the same care home as me and we’d get to see each other every day. I feel lucky to have my best friend back in my life, it feels like nothing has changed,” Boardman said, according to DailyMail.

The two women had both grew up in Eccleshall, Staffordshire in the West Midlands until Gill moved 20 miles away to Brewood when she was 12.

The friends lost touch after that.
Now they live just a few doors down from one another and try to have dinner together every night.

“We try spend a lot of time together – if we don’t see each other much during the day, we’ll always have dinner together. Eileen will come behind me and touch my arm to let me know she’s there,” Boardman said.

Both of their husbands have passed. So, Gill makes sure to include Boardman in her family endeavors.
“They have all been very nice to me – I feel like an extended part of their family. I couldn’t feel happier that we’re now reunited and get to reminisce on our old memories as well as creating new ones,” said Boardman.

While the two women see themselves as being together in the near future, they still promised that they will keep in touch if one of them ends up moving out of the facility.

In the meantime, they are having the time of their lives reconnecting just like old times.

Learn more about this precious friendship in the video below!