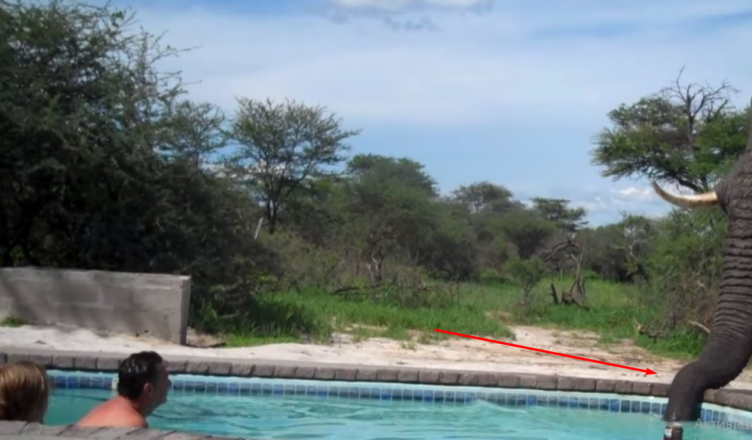 How would you feel if an elephant crashed your pool party?

When hot weather is upon us, there’s nothing more satisfying than a pool party. For me, hot weather means a cool drink, a nice book, and some rest and relaxation— but an elephant? No, an elephant is definitely not in the picture.
A video filmed in 2010 of an elephant crashing a pool party went completely viral, garnering over 11.6 MILLION views. Uploaded by Kerry Dunne on February 9th of the same year, the description reads:

“Best chicken fight partner ever. And at least he was polite enough to not knock over the beer. P.S. this wasn’t zoomed in, this was the actual distance.”

The minute-long video shows an enormous elephant slowly walking up to an empty pool. The animal’s big ears flap with every step as he makes his way to the edge of the pool.
The contrast between the wild elephant and the suburban-looking swimming pool immediately catches the viewer’s eye as the elephant approaches it to take a drink. The big elephant drenches its trunk in the swimming pool, refreshing itself with some fresh, cold water.

The elephant appears to make eye contact with the swimmers, holding their gaze for a few moments before deciding he’s had enough to drink. With that, he gives his ears a few good flaps and is on his merry way.
The video was filmed at Elephant Sands, a bush lodge located in the North-Eastern district of Botswana, Africa. The lodge has confirmed the water in the pool is not chlorinated and completely fine for the elephant to drink.

Watch the video below!