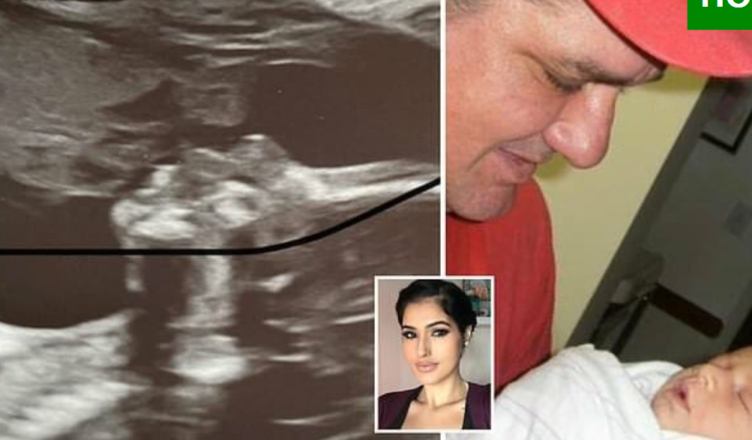 To me, miracles seem to happen almost daily — but are not always identified as such. Because everywhere around us, life is full of mysteries — a glass of water, a ray of sunshine, a leaf, a caterpillar, a flower, laughter, raindrops — or even an ultrasound image detail.

Now a mother from California claims that her ultrasound examination showed something amazing, which is a little hard to believe.

At first, 30-year-old Shantel Carrillo thought she was the only one seeing it — but when she showed it to her friends and family, they couldn’t help but see it as well.

«As soon as I posted the picture, 30 seconds later, someone wrote, ‘There’s an angel kissing your baby'», she said.

Shantel is convinced that it is her late father, Chuck, who kisses her daughter in the ultrasound images.

«He has his nose, plump cheeks, little double chin, and my dad wears a hat all the time. His lips seem to touch her perfectly», Shantel said.

Shantel posted the picture online along with a picture of her father and eldest daughter. According to Shantel, her beloved father was so happy to be a part of his granddaughters’ lives.

She added that what may be seen on ultrasound could be her placenta, but Shantel is still proud and happy with the photos, and she thinks they add another dimension to her pregnancy.

Her daughter is due to be born in April — the same month her father was born. Still a coincidence or not?

We don’t know what to believe, but it seems that Shantel’s father is guarding his granddaughter, and we must say that the ultrasound figure is very similar to a human figure. What do you think?