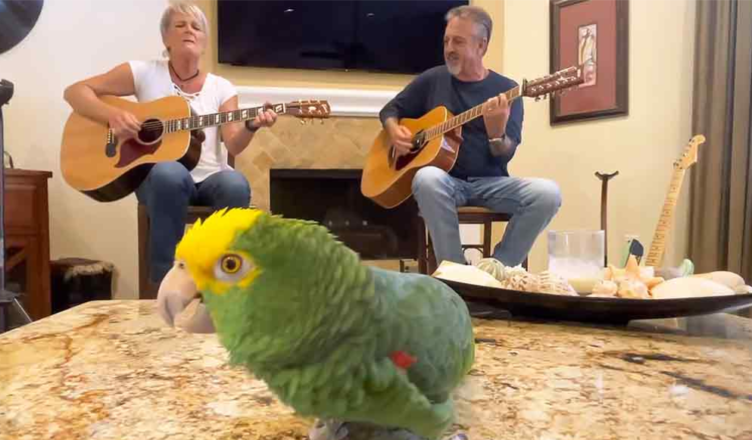 Parrots are one of the most talented birds you will ever come across. Tico, the parrot, was no different from this statement. Recently, he was caught creating a rendition of Bob Dylan’s “Knockin’ on Heaven’s Door.”

Tico’s performance, while singing the song, was outshining. While the talented bird sang the song, he was supported by his owner, Frank Maglio, and his friend Lisa Rott. Both of them played the guitar and sang the song occasionally with Tico.

The way Tico sang Bob Dylan’s song proved that the bird had a distinctive and melodic voice. Tico was whistling way better than any human when he wasn’t singing. Unlike most parrots, Tico had the idea of when to stop singing and when to start.

When it was time for the music to play on the guitar, Tico would walk around the table or scratch behind his ears. It showed in Tico’s every movement, enjoying his performance in front of Lisa and Frank.

Since parrots have two vocal organs, Tico could sing the song in multiple pitches, which humans cannot do. However, Tico would occasionally go high-pitch, and his pitch would drop drastically.

It was clear from how Tico sang the song that he had plenty of practice. He had previously sung several songs with Frank, and the parrot seemed to enjoy singing all types of songs.

Lisa seemed to enjoy Tico’s singing. The way the bird moved his head while singing the song was fantastic. He behaved like a rock star and wholly controlled the music during his performance.