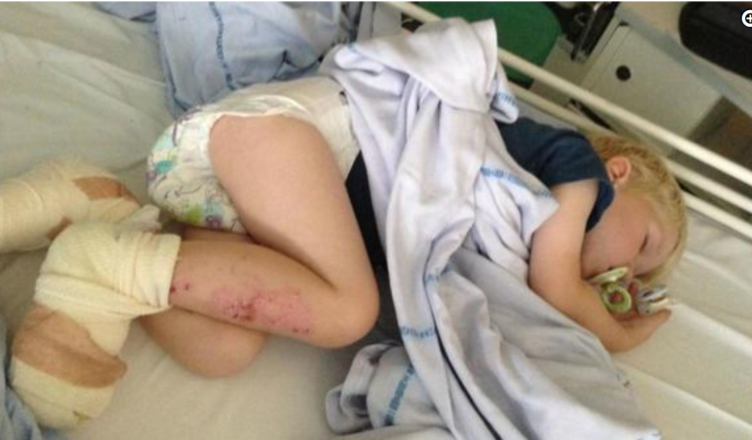 Summer is here and families and friends are flocking to the beach.

Children especially love to wade in the water, play in the waves, make sand castles, and eat ice cream in the sun. But for 3-year-old Jacob, the visit to the sea ended in tragedy.

Jacob was at the beach with his mother Katya, running barefoot on the sand. Seconds later, his fun summer trip turned into something horrific.

Jacob stepped on burning coals hidden under the sand. Someone must have made a fire the night before and thought the fire would die down if they just covered it with sand.

Jacob suffered severe burns on both of his feet.

«You could see that the skin on his feet was starting to peel off», said Katia, Jacob’s mother.

The reason she decided to write now about what happened to Jacob is that she read about another person who suffered the same terrible experience.

«Jacob was in and out of hospitals for over a year, he suffered from terrible physical pain, and the rehabilitation was very difficult — not to mention the emotional toll it took on him».

Katya and Jacob immediately went to the nearest hospital. The staff cooled the legs of the boy who was screaming in pain.

But the doctors said Jacob might lose some of his toes. Katya fainted when she heard the news.

But luckily, the doctors managed to save Jacob’s toes, even though his rehabilitation was long and he had to undergo several surgeries. He also underwent skin grafts.

Although a long time has passed since the event, Katya does not forget it for a moment.

Jacob still has scars on his feet, but he has fully recovered.

Katya was shocked by the number of shares her post received. She wants to remind people that they should put out their fires with water, not cover them with sand.

She doesn’t think the people who didn’t put out the fire had bad intentions. It must have been ignorance.

So if you make a fire at the beach, please put it out with water. It is not known who will pass there tomorrow, and if the fire has actually gone out or not.