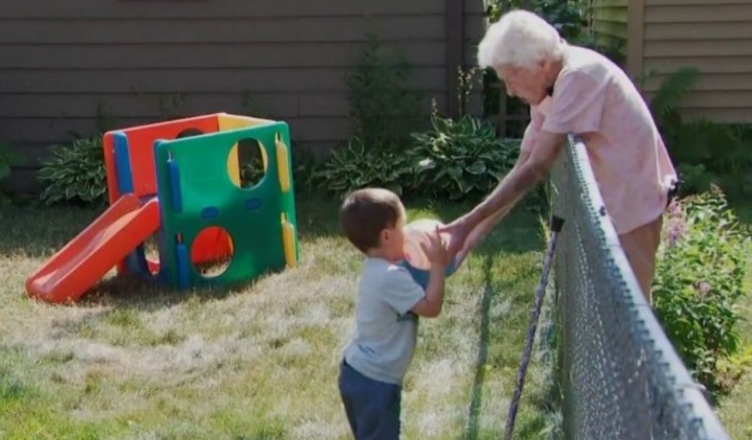 See their touching friendship firsthand in the vide0 below.

Mary began growing close to the little boy next door until eventually, she told his mom how she felt about them, bringing mom to tears.

You don’t have to be a certain age to be someone’s friend.
Mary O’Neill and Benjamin Olson are next-door neighbors and spend a lot of time together playing ball, talking, and just enjoying each other’s company. It doesn’t seem to matter in the slightest that they are 97 years apart in age.

A new world
Because of the pandemic, the two neighbors were happy to find each other.

There were many days at home alone for Mary, 99. She would play Yahtzee on a handheld electronic device or watch TV to fill the hours. “I play against myself,” said Mary. Benjamin was at home with his mom, dad, and baby brother.

Fast friends
That all changed when Mary and Benjamin ventured outside one day. The two became fast friends. Mary walks over to her fence and waves to Benjamin. “Hi Benjamin!,” she says. Benjamin happily comes bounding down his back steps to see his pal.

Bonding
Benjamin runs to pick up a ball to start one of their favorite past times.

“We call it ‘Cane Ball.” Mary says with a smile. She puts her cane over the fence and uses it to hit the ball toward Benjamin. They both smile and giggle and quickly start the game all over again. “Here it comes,” Mary says to Benjamin.

True friendship
Benjamin’s mom, Sarah starts to tear up as she talks about their adorable friendship. “His first best friend,” she says.

A lifelong impact
“I missed them, missed seeing them when it was too cold for them to come out when it was raining.” – Mary O’Neill

Benjamin’s mom is touched by Mary’s words as she realizes just how important this friendship has become. “I had never known that,” Sarah says. “I’m so happy they have each other.”

The games begin again with Benjamin pointing his stomp rocket across the fence toward Mary’s yard. Mary shouts, “Go!” and it launches across.Mary surprised Benjamin with her son’s old trucks.
The trucks used to belong to Mary’s son. “My son’s,” Mary says. “He passed away, so they’ve been sitting down in the basement for years and years.” Mary had also lost her husband 37 years ago. Her house is decorated with photos of her grandchildren and great-grandchildren, who can’t visit as often because they live out of state. She also proudly displays photos of Benjamin and his baby brother.

“They’re the closest thing to grandchildren I have around here,” – Mary O’Neill
Their days in the backyard are filled with bubble fun and dirt gifts. Benjamin toddles over to Mary with a handful of dirt in his tiny fist. “Oh boy, I’m going to get some dirt!” “Thank you!” she says to Benjamin as he hands over the dirt. “Oh that’s nice dirt,” she tells him.

Living their best life
Despite a fence, a 97 year age gap, and a pandemic, Mary and Benjamin have formed a lasting friendship and everyone is happier for it.

See their touching friendship firsthand in the vide0 below.