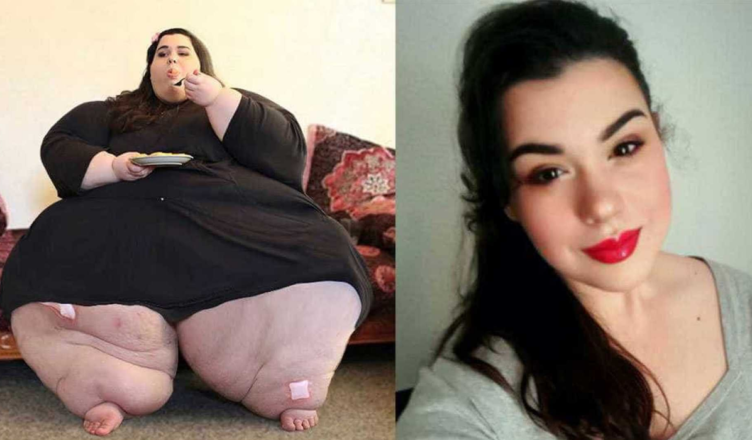 Amber Rachdi has always weighed a lot. But at 24 years of age, it has already gone too far.

She weighed 600 lbs and could no longer handle herself. She moved in to live with her parents so that they could help her.

She knew she couldn’t live like that anymore and her partner, Rudy, encouraged her to make a change.

She left the house only to buy food and was completely dependent on her electric wheelchair.

And the weight did not only affect Amber mentally but also physically. She had to wash the thick folds in her skin with a long brush to avoid contamination.

As a last resort, she applied to participate in the «My 600 lb Life» program to try and reduce her weight.

At that point, she was eating more than four large meals a day, in addition to lots of sweets. The more miserable she was, the more she ate.

She was trapped in a vicious circle and could no longer even sleep with her partner because she weighed so much. Their sex life did not exist.

She finally decided to undergo gastric bypass surgery, but had concerns. There were major risks involved with this type of surgery due to her weight. Her spouse, Rudy, was also very worried.

In order for her to undergo the surgery, Amber had to drop 22 pounds.

Amber was determined. She moved to Texas to be closer to the doctor who was supposed to do her surgery, Dr. Neusraden. She also changed her menu to a healthier one.

In three months, she dropped 20 pounds and was finally able to undergo the surgery.

It was the beginning of Amber’s new life.

Seven months after her surgery, Amber dropped a total of 90 pounds.

With a lot of motivation behind her, she started doing sports and continued to lose weight.

12 months after the surgery, Amber met the doctor for review. She successfully lost 143 pounds of her body weight. She was barely recognizable.

Dr. Neusraden was so proud, and agreed to have her surgery and remove the excess skin.

Amber continued her healthy lifestyle and began to go to a therapist so she could learn how to deal with her problems in a way other than eating.

After suffering from depression for years, Amber is finally happy again.

She has a few more pounds to remove before reaching her goal, but she’s on the safe path to her goal.

Amber proves that no such thing is possible. What a huge inspiration!