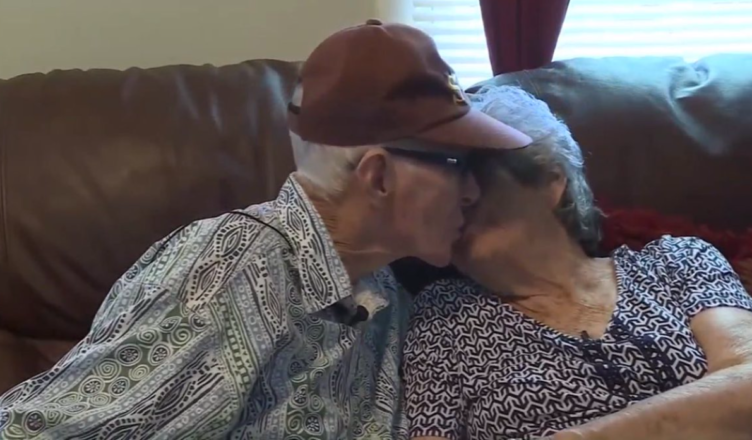 Herbert and Frances spent more than seven decades on this earth together, then left it on the same exact day. Their love story is beautiful.❤️

When Frances was just 16 years old, she used to work at a local cafe in Waynesboro, Georgia.

The beautiful young lady must have had many admirers, but one couldn’t take his eyes off of her. It was Herbert Delaigle.
The 22-year-old man fell in love with her, and it took him some time to find the courage and the right words to ask her out one day.

But since he did, they had always been together.

A year after their first date at the movies, Herbert asked the big question.

“I asked her will she have me as her husband and she said, ‘Of course,’” he told CBS affiliate WRDW in 2018, when they celebrated 70 years of marriage.

And, although Frances was eager to marry the love of her life, she was nervous about the big day because she knew Herbert was always late.
Indeed, the preacher almost refused to marry them. It took some convincing, but he ended up speeding up the service.

As for how much their wedding cost? Well, it was as low-budget as one can imagine.

The couple led a happy life, they had six children, and they never stopped sharing happy moments and laughs. You see, even after seventy years, Herbert still found ways to make his beloved wife laugh.

In July 2019 Herbert’s heart stopped, and exactly 12 hours later (to the minute), Frances passed away, too. It’s as if they had arranged to meet up in Heaven and Herbert left first because he knew he would be late as always!

“It’s amazing how they were together for 71 years and now they are together in Heaven. What an amazing love story that is,” their family said after their passing.

The Delaigle couple’s story sounds like it’s taken out of a book or a movie, especially since they both left this world such a short time apart. Sadly though, it can happen.

It is not unusual for the spouse who is left behind to suffer a heart attack or a stroke after their partner passes away.

Still, this couple’s story is not about death and grief, but about celebrating their love for each other, and their happy life together.

Watch the couple’s beautiful story in the video below!