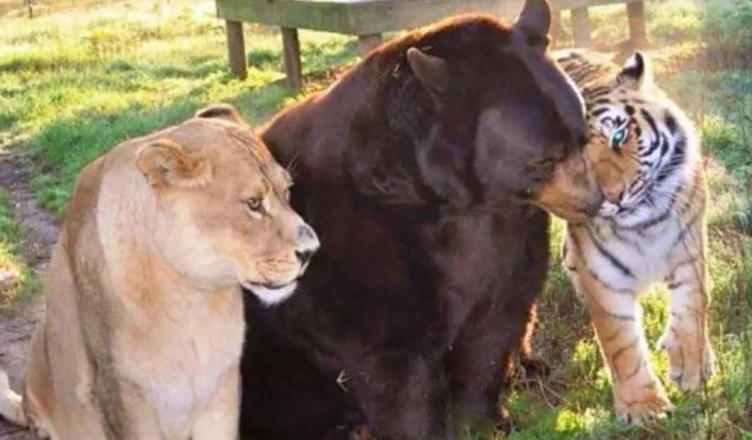 The Noah’s Ark Sanctuary in Georgia is home to a tiger, a bear, and a lion. The three of them were rescued as cubs and have now formed an unlikely friendship with each other.

Baloo was an American black bear, Shere Khan was a Bengal tiger, and Leo was an African lion. All three of them were rescued by the sanctuary when they were not even a year old. The scared cubs were found in the basement of an Atlanta home during a raid by the police.

Sadly, all three of them were abused and neglected. They were starving and terrified of humans. Both Shere Khan and Leo were wounded. However, out of the three, Baloo had the worst condition.

The poor bear was trapped in a tightly wrapped harness around his neck, too painful for the little cub. It was so tight that his flesh grew around it. Finally, the three of them were brought to the sanctuary.

Baloo was soon rushed to the surgery. His other friends paced around their enclosure restlessly when the little one was operated on. It felt as if they were worried about their friend.

The sanctuary workers thought it would be better to keep the animals separated. But the three of them kept on crying when they were alone. So, they quickly reunited in the same enclosure.

As the trio grew up, they still shared a strong bond. The little cubs would not have survived in the wild. The sanctuary had provided them with a fantastic option. They had plenty of space to wander around and had people who cared for them. They were spending their days cuddling and playing with each other.