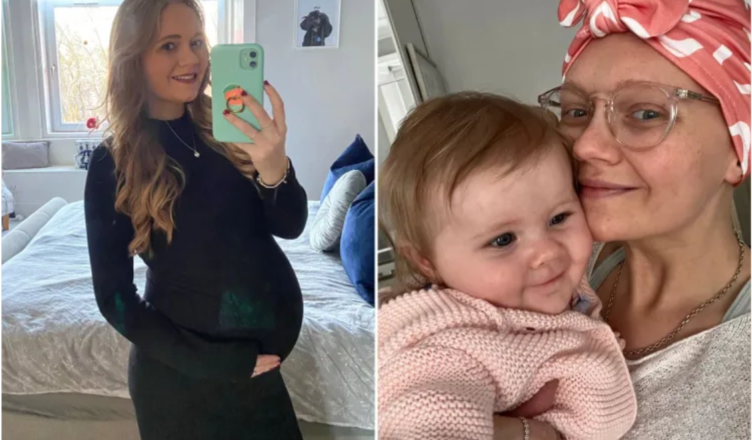 But medics put this down to cervical ectropion, a condition whereby cells grow on the outside of the cervix, and said that this had likely been caused by the contraceptive pill she was taking at the time.

Nicola, who works as a supervisor at Nando’s stopped taking the pill and three weeks later fell pregnant.

However, the pain continued with experts saying it was just due to her pregnancy.

To her horror, after giving birth, she was diagnosed with stage three cervical cancer.

Nicola Cameron fell pregnant after coming off the pill. Medics had told her it may have been causing her issues with her cervix which had left her in severe pain

After giving birth, she lost a lot of weight rapidly, and was given a shocking cancer diagnosis

Now Nicola is warning all mums to know the key signs of the illness after she spent her pregnancy in agony.

Nicola, who lives in Scotland, had been experiencing pain for a year and a half before her diagnosis.

She gave birth to little Blair on January 25 this year and started to lose weight at an alarming rate.

During that time she was constantly seeing her GP, as she was dealing with extreme lower back and abdomen pain.

She said: «I was initially being told that all the pain and bleeding was down to my emergency C-section and that it was my insides healing.

«I was having constant blood tests, being sent to the haematologist, getting a chest X-ray, and even called NHS 24 when I almost passed out with the pain at home.

«At one point I was on 32 tablets a day including antidepressants, as I was also diagnosed with post-natal depression.

«I noticed a massive weight loss as well, which was a big red flag to me.»

The pain continued and on July 5 she was rushed to hospital as she was crying due to the severity.

Nicola Cameron
Experts took a biopsy and Nicola was given the shocking diagnosis.

She said: «At first, when they told me it was cancer, I couldn’t take in the news – I was in shock.

«It was my worst fear realised. I thought I was going to die and never get to see my beautiful daughter, Blair, grow up and that she would have to go through her life without knowing her mum.

«The doctor started to explain things to me as best they could and I had to interrupt and say ‘sorry, did you say that you think this is definitely cancer?’

«And when she answered yes, that’s when I started crying.

«The next thing to go through my head was ‘oh God, how am I going to tell Gary (my partner) and my parents?’

«Mentally, I felt numb, it didn’t sink in until a couple of weeks after my diagnosis but when it did I cried every day for about two weeks.»

Nicola said that the smallest things would set her off and added that she had been scared about the future and what would happen to her and her family.

Since her diagnosis, the mum-of-one has undergone three gruelling rounds of chemotherapy and is due to start radiotherapy in October 2022, along with four rounds of brachytherapy.

While she knows she has a tough battle ahead of her, she said she is trying to not think of the further treatment she needs to have.

Medics are still waiting to review recent scans in order to give Nicola an up-to-date prognosis.

She said both the physical and mental symptoms are taking a toll on her, but added that she is fighting them as she wants to see her little girl grow up.

She added: «I won’t get to experience all the things I was looking forward to with her throughout my pregnancy.

«It also worries me that something could also happen to her when she’s older.

«What if she has a similar diagnosis when she’s a young woman or even later in life?

«I just want her to grow up to be happy and healthy, as every mother does.»

‘GET YOUR SMEAR TEST’
Nicola said that she is also scared of the cancer coming back, and her having to go through the process again.

«I’m just trying not to look too far into the future or think about my upcoming treatments too much, as it causes me a lot of anxiety and upset.»

While her physical pain is ‘managed’, she said she still has bad days where the disease keeps her in bed.

Nicola is now urging other women to advocate for themselves if they are worried about symptoms.

«Don’t let your pain or symptoms be pushed aside as you never know when it’s going to be too late for you.

«You deserve to be heard and looked after. Ladies, please go to your smear/pap appointments.»

When she was first diagnosed, Nicola said she didn’t know how she would tell her partner Gary

The family are now living in hope following Nicola’s treatment, and she says she will fight the cancer in order to see her little girl grow up