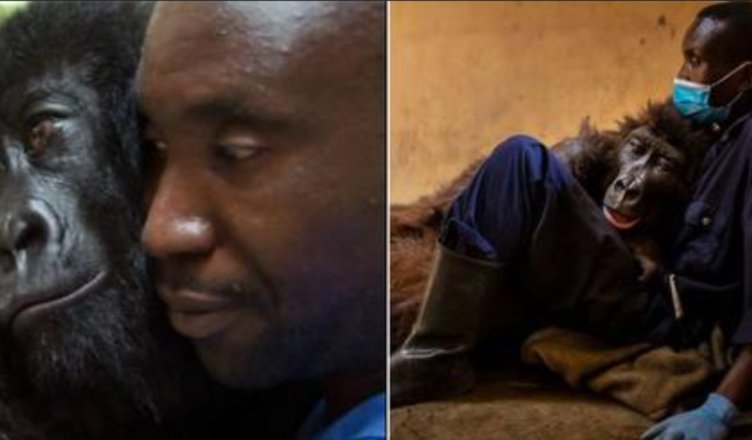 Such a sad video but yet so beautiful. 😢 The bond between her and her caretaker was so strong.

Back in 2019, a mountain gorilla from Congo became viral because of her adorable photos.
She was not shy about photobombing pictures of the people she was with and even had selfies with them!

Ndakasi, the photobombing mountain gorilla, was loved by everyone in the national park where she lived.
She had a fun and playful demeanor and was always ready to pose for the camera.

Fourteen years ago, the gorilla was found in the forest beside her lifeless mother who died because of bullets from native hunters.

She was rescued by park ranger Andre Bauma and was brought to the national park to be raised.

Nadakasi’s story is not unusual.
Most of the mountain gorillas in the national park in Congo were saved from the wild, after being orphaned because of hunting activities in the area.

If left in the woods alone, they might be exposed to harsh weather and may not be able to live without their parents.

Park ranger Baua was there when Ndakasi needed to be saved, and from then on, the two of them created a bond like no other. Ndakasi grew up to be a fun-loving and happy gorilla.

Andre became more than just a park ranger for her. For the past 14 years, Ndakasi was taken care of by the people in the Senkwekwe Center in Virunga National Park, including Andre.

In 2019, Ndakasi became viral because of her cute selfie with Andre and other park rangers.
Her poses were quite adorable and something unexpected from a gorilla. People online loved her vibe and were amused at her penchant for posing in front of the camera.

She was one bubbly gorilla that people in the park and people online have learned to love.

Her excitement was infectious and she was just having fun.

She had the illness for a prolonged period of time, resulting in her succumbing to it.

When she breathed her last breath, Ndakasi was in the arms of no other than her best friend and savior, Andre.
The park ranger felt honored for the opportunity of getting to know Ndakasi and being her friend.

“It was a privilege to support and care for such a loving creature, especially knowing the trauma Ndakasi suffered at a very young age and one could say that she took after her mother, Nyiransekuye, whose name means “someone happy to welcome others,” shared the park ranger.

Friendship knows no species or race.
Whether animals or humans, it is undeniable that we need friends to live. We rely on each other, help each other and have fun together.

Friends do not necessarily mean someone of the same race or species as yours. Humans can be best friends with animals, just like Andre and Ndakasi’s inspiring story.

Their friendship has transcended boundaries and Andre will forever be grateful for having the chance to meet and be friends with such an amazing creature like Ndakasi.

Hear more about this beautiful story by watching the video below.