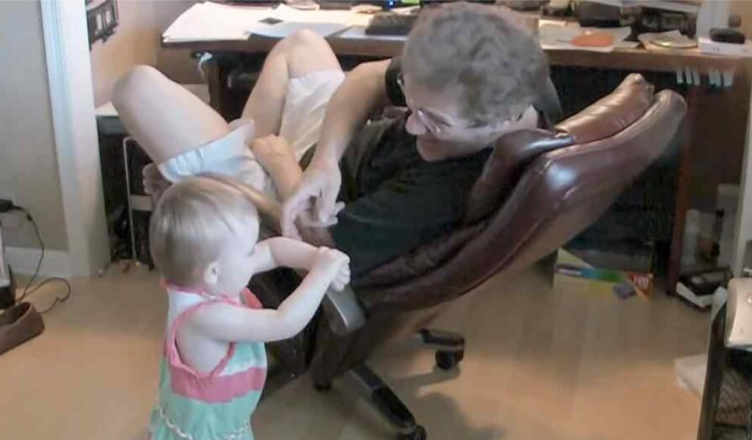 Grandfathers love their grandchildren, and one grandpa had an entire conversation with his granddaughter entirely in the baby language. It was a discourse that only the two of them understood.

They were in what appeared to be the grandpa’s office. He was leaning back on his relaxing chair and staring intently at his granddaughter. She was wearing a pretty dress and standing proudly.

As they were speaking gibberish, there was a lot of back and forth between them. The baby girl was moving her hands and arms constantly, and her grandpa followed suit.

It seemed that lots of gesturing were also key to speaking the baby’s language. Grandpa was smiling and laughing a lot, but it may have been something his granddaughter said.

There was recognition in both of their eyes. Not a single comprehensible word was spoken, but it was clear they were getting their points across. The baby girl had a compelling story to tell.

With lots of expressions and emotions, the granddaughter seemed to weave a beautiful tale. She was smiling, then disgusted, and even started smacking the floor at one point.

Then both grandpa and his granddaughter started pointing at something on the wall. She wasn’t surprised that her grandpa could understand her. They probably talked to each other all the time.