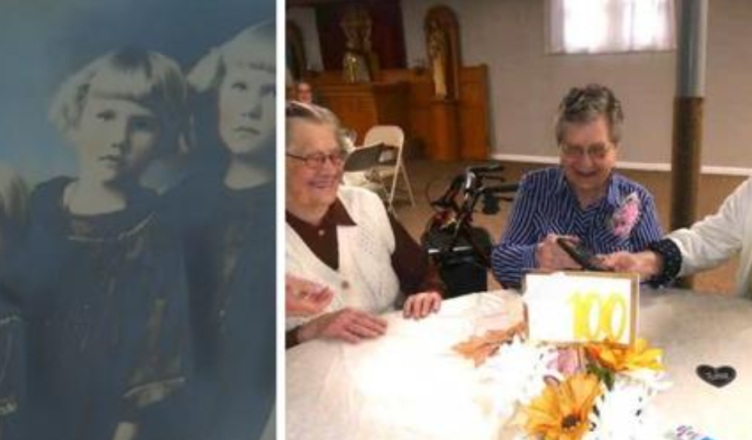 What’s better than turning 100? If you ask Frances Kompus, she’ll tell you it’s turning 100 with your two older sisters by your side.

The centenarian celebrated her big milestone with sisters Julia Kopriva who is 104, and Lucy Pochop who is 102.
The three grandmothers have always had a close relationship but a lot has changed since they grew up on a farm in Kansas in the early 1900s.

“It was good on the farm,” Kompus told USA Today. “I had a few geese to play with and even had some roosters I made pets.”

Kopriva was born in 1917, Pochop in 1919, and Kompus in 1921 to Florian William Holub and Frances Rose Chleborad Holub.
I just remember how we used to walk to school,” Pochop told KSNW. “It was about a mile and three-quarters. It was a long walk.”

“We’d cross the pasture, we would walk, and then on the way back, we would stop at the creek and catch frogs, put them in our pockets,” Kompus said.

Back then, the girls worked on the farm in dresses since girls didn’t typically wear pants back then.

“What I remember well is my father didn’t have modern tractors,’ Korpriva said. “We took gas, gasoline out in the field in five-gallon buckets.”

These women also lived through the Great Depression and the Dust Bowl. “It was dark sometimes. The teachers would call the parents, and, you know, to come and get us from school,” said Kopriva.

“Then, we had old homes, and at the bottom, my mother would always put wet towels so the dirt wouldn’t be so bad to come in. The younger generation don’t believe what we done went through. We work today, but we worked harder those days.”

They say that things are a lot better now than when they were younger.
“We have got refrigerators and deep freezers,” Pochop said. “We didn’t have that those days.”

“We always had homemade bread, just plain potatoes, and gravy and meat. With those cookstoves, that was hard to bake. The temperature was hard to keep. Even if it didn’t come out good, we still ate it,” said Kopriva.

While the sisters didn’t eat fancy, they ate good food which they say is how they’ve “been around for a while.”

They each had some advice for the younger generations.
“And pray and try to stay out of mischief,” said Kopriva.

“I would tell them to walk a lot,” Kompus said.

Kompus was happy to celebrate her 100th birthday at the Sacred Heart Catholic Church in Atwood where she and her sisters were baptized, confirmed, and married over the years.

Learn more about these three sisters in the video below.

Please SHAR E this with your friends and family.