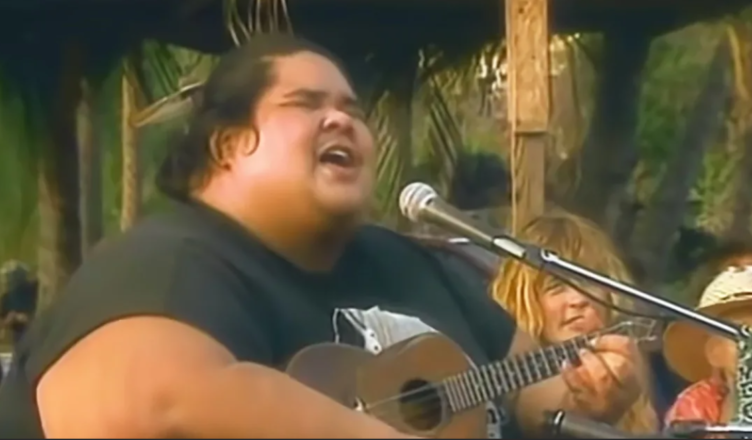 “Somewhere Over the Rainbow” is a famous song that was written and performed by a morbidly obese, ukulele-playing Hawaiian named Israel Kamakawiwo’ole. The 38-year-old, known affectionately as Iz, was the giant of Hawaiian music. He passed away in 1997, weighing more than 1,000lb and thousands of fans attended his funeral.

The song, released in 1993 as ‘‘Over the Rainbow/What a Wonderful World,’’ was featured on Kamakawiwo’ole’s album ‘‘Facing Future’’ and became part of several TV programs and commercials; it was also included in music scores for the movies ‘‘Meet Joe Black’’ and ‘‘Son of the Mask.’’

To Kamakawiwo’ole — known popularly as Iz, Big Iz or The Gentle Giant — the entry was much more than a music bed. Its gentle tenor ukulele and Iz’s lovely falsetto marked his music as the expression of native Hawaiian culture he felt was losing its leverage at the hands of the travel industry.

Indeed, Iz recognized as early as age 11 that the modern music of Hawaii was anything but traditionally Hawaiian. What would eventually follow were four studio albums and four compilation entries, with ‘‘Facing Future,’’ his most popular LP, achieving double-platinum status.

All are infused with the sunny, meditative ukulele that fuels stories and anecdotes about life on the islands as reflected in the state motto. ‘‘The life of the land,’’ it reads, ‘‘is perpetuated in righteousness.’’

Obesity would take a toll on Iz’s health; he weighed nearly 1,000 pounds when he died in June of 1997 at age 38. According to WBUR News, Iz once said:

‘‘I guess this is gonna sound kind of weird, but I’m not scared for myself for dying, because I believe all these places are temporary. This is just one shell, because we Hawaiians live in both worlds. It’s in our veins.’’

Are you a fan of Iz? Which one of his songs is your favorite? Let us know in the comments – and make sure you pass this along to your friends and family to carry on his legacy!